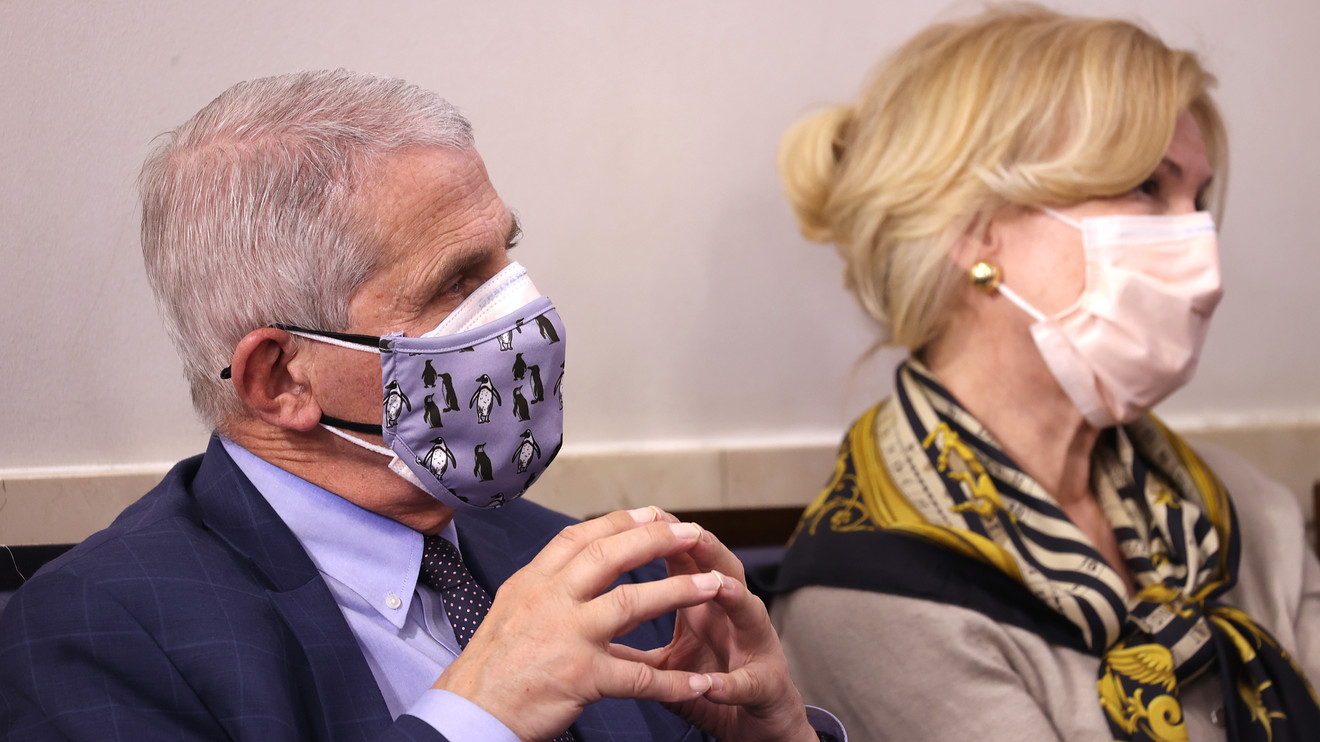 The global case tally of the coronavirus illness COVID-19 climbed above 57 million on Friday, and the U.S. moved closer to 200,000 cases in a day while setting a fresh record for hospitalizations as the virus continues to infect people in every state and region.

There was disappointing news on the medical front when a World Health Organization panel recommended against doctors using the drug remdesivir to treat coronavirus patients, saying it has “no meaningful effect on mortality or on other important outcomes for patients.” The drug made by Gilead Sciences Inc. GILD, -0.85% is the only one to win full Food and Drug Administration approval as a treatment for COVID-19, and not just an emergency-use authorization.

On a brighter note, Pfizer Inc. PFE, +1.40%  and partner BioNTech SE BNTX, +9.62%  are set to submit an application for emergency-use authorization for their COVID-19 vaccine candidate to the FDA later Friday. The drug makers said that means the vaccine could possibly be rolled out to a small group of people at high risk in the country by mid-December. Pfizer and BioNTech have said they plan to have 50 million doses of the vaccine, which can be used to treat 25 million people, worldwide in 2020.

Dr. Anthony Fauci, head of the National Institute for Allergies and Infectious Diseases, who warned in June that the U.S. could count more than 100,000 cases a day if it did not stick with the containment measures recommended by health experts — frequent hand washing, social distancing and face-mask wearing — on Thursday reiterated a recently employed metaphor that with vaccines showing high levels of efficacy in early analyses of data from clinical trials, “the cavalry is on the way.”

“If you’re fighting a battle, and the cavalry is on the way, you don’t stop shooting. You keep going until the cavalry gets here,” Fauci said at the first press briefing since July by the White House task force formed to manage the pandemic response.

Dr. Deborah Birx, coordinator of the task force, issued a call to action for every American to increase vigilance especially as the U.S. approaches the Thanksgiving holiday.

Standing in front of charts flashing deep red for most of the U.S., Birx explained that the fall surge is “more cases more rapidly than what we had seen before,” as she urged Americans not to let their guards down. As the pandemic includes many asymptomatic patients, it’s important to remain indoors with immediate household members and not to gather with others.

Dr. Robert Redfield, head of the Centers for Disease Control and Prevention, and Vice President Mike Pence also spoke at the briefing. Pence, who did not wear a face mask, said, “America has never been more prepared to combat this virus than we are today.” To the chagrin of reporters in attendance and health experts, Pence ended the briefing without taking questions.

Separately, the CDC is “strongly’ recommending that Americans not travel over Thanksgiving.

“As we’re seeing exponential growth in cases, and the opportunity to translocate disease, or infection from one part of the country to another leads to our recommendation to, to avoid travel at this time,” said Dr. Henry Walke, the CDC’s COVID-19 incident manager, during a briefing with reporters on Thursday.

The number of COVID-19 patients in U.S. hospitals is currently a record 80,698, according to the COVID Tracking Project, breaking the previous record of 79,140 set a day ago. Hospitals in the Midwest and South are rapidly filling. The U.S. continues to lead the world in cases at 11.7 million, and in fatalities at 252,599, according to data aggregated by Johns Hopkins University, or about a fifth of the global case and death tallies.

“The record levels of hospitalizations we’re already seeing will almost certainly be followed by a spike in the reported fatalities, even before this week’s million-plus new cases are taken into consideration, and even if Americans follow new state lockdown measures and skip big Thanksgiving gatherings,” read a COVID Tracking Project commentary.

State governors continue to take their own steps to curb transmission. California has introduced a 10 p.m.–to–5 a.m. curfew. In Maine, Gov. Janet Mills is ordering businesses to close by 9 p.m.

New Hampshire is adopting a face-mask mandate, and a group of Midwest governors has produced a video urging their residents to double down on safety measures.

• Nearly a million Chinese people have been given an experimental COVID-19 vaccine developed by state-owned Sinopharm, the South China Morning Post reported. China and Russia have both registered vaccines and started treating citizens, even though the vaccines are undergoing clinical trials to establish safety and efficacy.

• Spain is planning to vaccinate much of the population by mid-2021, according to local reports. The announcement was made by Prime Minister Pedro Sánchez, who said the government has drawn up a “comprehensive vaccination plan” that will be presented at a cabinet meeting next week. Spain and Germany are the first two countries to have devised a full immunization scheme. The EU has contracts to reserve hundreds of millions of doses of future vaccines with BioNTech, Purevac, AstraZeneca and Sanofi if they can be brought to market.

• South Australia entered a lockdown because a pizza baker lied to tracers about how he contracted the virus, the BBC reported. The man claimed he was a customer at a pizzeria, prompting health officials to assume he had caught COVID-19 during a very short exposure and leading them to believe the strain was highly virulent. “To say I am fuming is an understatement,” the state premier, Steven Marshall, told reporters.

• Sweden recorded a record 7,240 new COVID-19 cases on Friday, the Guardian reported, citing health-agency statistics. The previous one-day record was 5,990, set earlier in November. Sweden counted 66 deaths, boosting its overall toll to 6,506, or several times higher per capita than neighboring countries. Sweden has taken a controversial approach to the pandemic, declining to lock down while relying on its citizens to behave responsibly. It has started to revise that approach in the face of surging infections.

The number of confirmed cases of COVID-19 worldwide now stands at 57 million, according to the Johns Hopkins data, and the death toll is 1.4 million. At least 36.6 million people have recovered from COVID-19.

Mexico has the fourth highest death toll at 100,104 and the 10th highest case tally at 1 million.

China, where the disease was first reported late last year, has had 91,965 cases and 4,742 fatalities, according to its official numbers.

• Carnival Corp.’s CCL, -4.50%  Princess Cruises is extending the suspension of cruises through March, and for some of its cruises for another year, in response to the CDC’s phased approach to resuming cruises. Princess said all cruises will now be suspended through March 31, while cruises lasting longer than seven days to and from U.S. ports will be suspended through Nov. 1 of next year. The company is also extending the suspension of cruises to and from Japan through June 25. “We are focused on preparing our ships to meet the CDC health and safety requirements for our eventual return to service,” said Princess President Jan Swartz. “We also appreciate the continued support we have received from our guests, partners and travel advisers, reinforcing for all of us why we do what we do.”

• Eli Lilly & Co. LLY, +1.45%  won FDA emergency-use authorization for its rheumatoid arthritis drug Olumiant as a COVID-19 treatment if it’s used in combination with Gilead’s remdesivir. The drug combination can be used in adults and children older than 2 years old who have been hospitalized with COVID-19 and require supplemental oxygen, mechanical ventilation, or extracorporeal membrane oxygenation. These tend to be the sickest COVID-19 patients. Lilly also recently received an emergency authorization for its COVID-19 antibody treatment, making it the only drug manufacturer to have received EUAs for two different COVID-19 therapies. Data from a clinical trial found that the combination of Olumiant and Veklury can help speed up recovery times for some severely ill, hospitalized COVID-19 patients.

• Foot Locker Inc. FL, -4.96%  reported a surprise increase in same-store sales and profit that rose well above expectations. Sales increased 9% to $2.11 billion, above the FactSet consensus of $1.95 billion, while same-store sales rose 7.7% to beat forecasts for a decline of 0.2%. “Although the back-to-school season kicked in later than usual due to COVID-19–related delays, momentum built as the quarter progressed, and we were pleased with our customers’ continued strong engagement across our family of brands,” said Chief Executive Richard Johnson. The company did not provide financial guidance, given continued uncertainties created by the COVID-19 pandemic.

• Hibbett Sports Inc. HIBB, +1.21% blew past estimates for the third quarter and raised its guidance. Sales rose 20% to $331.4 million from $275.5 million, ahead of the $286 million FactSet consensus. Same-store sales rose 13.2% to top the 10% FactSet consensus. E-commerce sales rose 50.7% to account for 13.2% of total sales, up from 10.5% a year ago. “We believe the increase in overall sales was positively impacted by continued strength in omni-channel adoption, improved new customer retention, market disruption, and availability of in-demand product, which collectively helped increase the revenue per transaction in the quarter,” the company said. “The direction of the pandemic is uncertain, but we will continue to adapt and safeguard our customers and team members, while also striving to generate positive returns,” said Chief Executive Mike Longo. The company is now expecting fourth-quarter same-store sales to range from a high-single digit increase to a low double-digit increase. It expects EPS to range from $1.00 to $1.10, compared with a FactSet consensus of 60 cents.

• Williams-Sonoma Inc. WSM, +6.60%  announced third-quarter earning that blew past estimates as it benefited from at-home dining during the pandemic. Williams-Sonoma posted net income of $201.8 million, or $2.54 a share, compared with net income of $74.7 million, or 94 cents a share, in the year-ago quarter. Revenue grew 22% to $1.77 billion from $1.44 billion a year ago. Analysts surveyed by FactSet had expected earnings of $1.56 a share on revenue of $1.59 billion.