Home
Stocks
What's Worth Streaming: What to stream in a pandemic? Here are 25 comfort shows to binge and get your mind off coronavirus
Prev Article Next Article 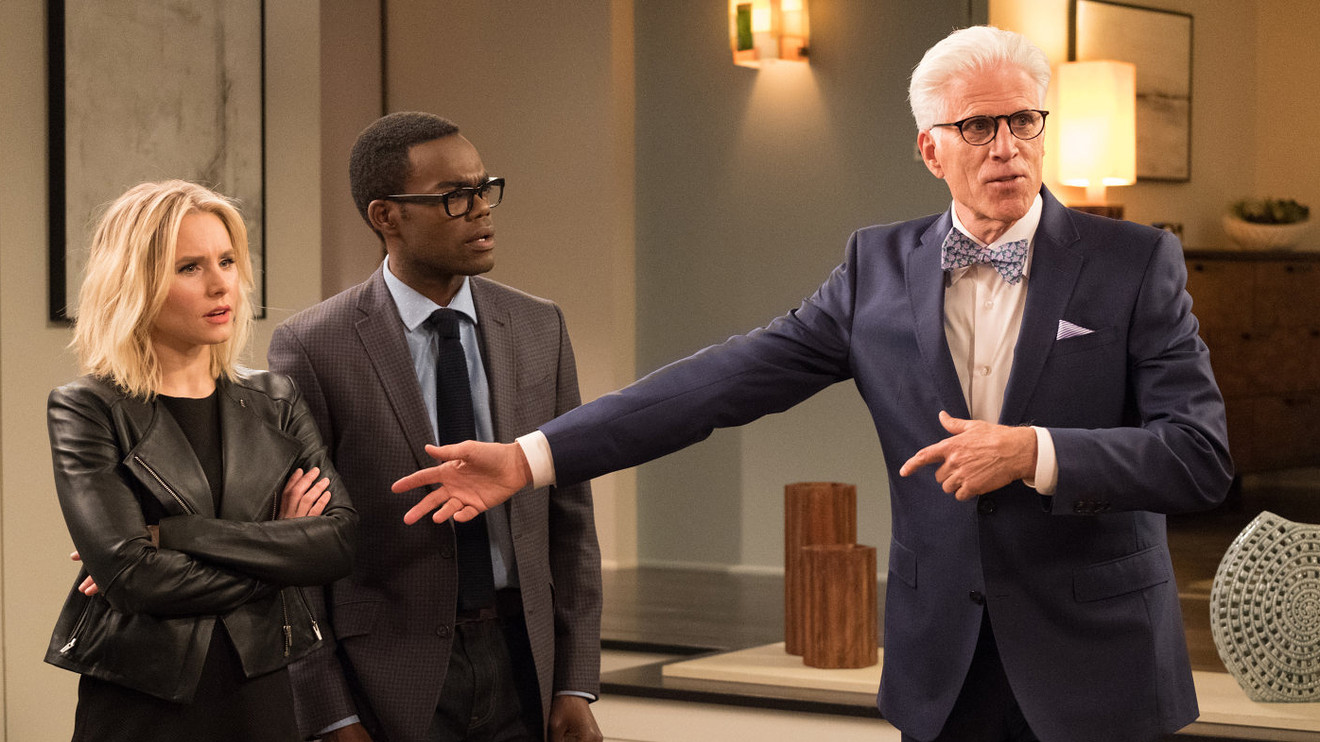 Well, it looks like we’re all about to spend a lot more time indoors.

With the coronavirus outbreak forcing people to “socially distance” and in some cases self-quarantine, we’re all likely to have a lot more idle time on our hands as we stay at home in hopes of slowing the illness’s spread. But how to fill that extra time? By binge-watching comfort shows, of course. And if you don’t already subscribe to Netflix NFLX, +7.00%  , Amazon AMZN, +7.03%   Prime Video or Disney’s DIS, -1.56%   Hulu, now wouldn’t be a bad time to start.

Here are 25 series — some old, some newish — that should help the hours pass. A few parameters: nothing too obvious (of course you can still rewatch the classics, like “The Sopranos,” “Mad Men” or “The Wire”); nothing too stressful (sorry, “Breaking Bad” and “The Shield”); nothing too apocalyptic (looking at you, “The Leftovers” and “The Walking Dead”).

And everything coming in March to: Netflix | Amazon Prime Video | Hulu

Instead, these series offer something more comforting — humor, heart, fun and in some cases, just plain relaxation. We’re in for some trying times ahead: Hopefully these shows can offer some relief, if only for a few hours at a time.

Dramas that aren’t too heavy

“Terriers” (Hulu, one season): Few series fit the “brilliant but canceled” description as well as this one. This 2010 neo-noir follows a pair of scruffy unlicensed private eyes (Donal Logue and Michael Raymond-James) solving crimes and slowly unraveling a conspiracy in a Southern California beach town. While at times dark (it’s not called “noir” for nothing), the series’ sharp sense of humor and underdog attitude keep it from becoming too bleak. It’s hard to describe exactly why it’s so great — maybe it’s the completely lived-in world the characters inhabit, and Logue and Raymond-James’ easy chemistry — but it IS definitely great.

“Lodge 49” (Hulu, two seasons): A quirky, surreal, thoroughly warmhearted comedy/drama starring Wyatt Russell about lost souls finding community through a social club amid the wreckage of late-stage-capitalism in America. Another weird one to describe — it’s almost more of a vibe than a show, but it really sticks with you.

“Halt & Catch Fire” (Netflix, four seasons): Painfully under-watched when it ran on AMC, this drama about tech entrepreneurs in the ’80s and ’90s realized midway through its first season that its two female side characters (played by Mackenzie Davis and Kerry Bishé) were more interesting than the male leads (Lee Pace and Scoot McNairy), then shifted its story to focus more on them, and the series was much better for it. It’s about innovation, visionaries and balancing creativity with cold-hearted business, and it’s utterly, devastatingly brilliant.

“Justified” (Hulu, six seasons): In a word: rollicking. Timothy Olyphant stars in this Elmore Leonard-inspired modern-day Western about a U.S. marshal in rural Kentucky. The first season is fine, but it’s the second season where the show rises to something special. The villains, who in various seasons include Margo Martindale, Jere Burns and Walton Goggins, are tremendous.

“Money Heist” (Netflix, three seasons, with Season 4 coming in April): Totally ridiculous and featuring more twists than a phone cord, this Spanish heist drama about an “Ocean’s 11”-type crew robbing the Royal Mint in Madrid is also ridiculously fun and cliffhanger-ey, reminiscent of a peak season of “24.”

“Jane the Virgin” (Netflix, four seasons): A twist on a classic telenovela, this lovable, twisty rom-com starring Gina Rodriguez is so, so full of heart. If you walk away with dry eyes, you’re a monster.

“Tremé” (Amazon Prime, HBO Now, four seasons): David Simon’s love letter to post-Katrina New Orleans. There’s a plot, but it’s secondary to a deeply immersive peek into the richly drawn lives of the characters, along with fantastic music. There’s sadness and tragedy, but there’s also triumph and redemption and a real sense of rebirth and hope.

“The Good Place” (Netflix and Hulu, four seasons): It’s rare for a show to be THIS nice, and THIS clever, and THIS perfect. But the sharply written afterlife comedy, starring the always delightful Kristen Bell and the somehow even more delightful Ted Danson, is just that — perfect.

“Happy Endings” (Hulu, three seasons): Looking for a modern “Friends”? This ensemble comedy took a few episodes to gel, but once it did, it was one of the funniest things on TV. Though a traditional sitcom at its core, it’s so much more twisted and weird and wacky, and with a cast that somehow remains immensely likable despite their characters’ worst efforts.

“Cougar Town” (Hulu, six seasons): Another one that took about half a season to really get going, but once its incredible cast — including Courteney Cox, Christa Miller and Busy Philipps — meshed, it became an unstoppable comedy machine.

“Better Off Ted” (Hulu, two seasons): The best unseen workplace comedy ever? This surreal, deeply satirical series aired more than a decade ago, but its anti-corporate take is still spot-on.

“What We Do in the Shadows” (Hulu, one season, Season 2 coming in April): A clever and hilarious adaptation of the movie of the same name by Taika Waititi and Jemaine Clement, this is a mockumentary about arguably the lamest vampires on Earth, living as roommates in Staten Island. Warning: Watch it, and you’ll start noticing Energy Vampires everywhere.

“Bored to Death” (Amazon Prime, HBO Now, three seasons): Jason Schwartzman, Zach Galifianakis and Ted Danson star in this charmingly offbeat private-eye show that never gained more than a cult following when it ran from 2009-’11. But it was a goofy and literate cult, at least.

“Enlightened” (Amazon Prime, HBO Now, two seasons): Pretty much no one watched this. But they should have. Laura Dern stars as an annoying exec who has a mental breakdown and becomes an irritating do-gooder. But it’s so much more than that, a meditation on modern life that’s ultimately uplifting and oddly inspiring. You might not feel it right away, but this show will sneak up on you.

“I Think You Should Leave” (Netflix, one season): If you just want to laugh a lot and wonder “what did I just watch?” this sketch comedy is the ticket. Starring Tim Robinson, it’s bizarre, absurd and stupid, in the best possible way.

“Derry Girls” (Netflix, two seasons): A funny and full-of-heart sitcom about a group of teenage friends growing up during The Troubles in 1990s Northern Ireland. Pro tip: Turn on the subtitles.

“Superstore” (Hulu, five seasons): On one hand a goofy workplace sitcom. On the other, a pointed satire about the working class in modern America. Together they make one of the best and most warmhearted broadcast comedies of recent years.

“Letterkenny” (Hulu, eight seasons): A ridiculously weird Canadian sitcom about life in a small town. It’s intensely profane, and 90% of the comedy is in its language — the delivery, the slang, the cadence. It is truly like nothing else on TV.

Reality shows to relax to

“The Wine Show” (Hulu, two seasons, Season 3 coming soon): A surprising gem, with hosts Matthew Goode (”Downton Abbey”) and Matthew Rhys (“The Americans”) in Season 1, and James Purefoy (“Rome”) taking Rhys’s place in Season 2. Along with wine expert Joe Fattorini, they quaff bottles from around the world, banter in beautiful locales, and ultimately demystify wine. It’s like the TV equivalent of a good pour: Smooth, relaxing, delicious (aurally, at least). You’ll probably learn something, and it’ll definitely make you want to drink more.

“The Great British Baking Show” (Netflix, seven seasons available): Speaking of nice. If you haven’t seen it, you’ve at least heard about it. It’s everything you’ve heard: a simple, low-stakes-yet-dramatic, outrageously pleasant, supremely kind baking competition. And it is mesmerizing.

“Instant Hotel” (Netflix, two seasons): An oddly addictive reality show about couples competing for the best Airbnb in Australia. It’s got the house-porn of HGTV combined with the scheming social plotting of “Survivor” — plus Aussie accents.

“Grand Designs” (Netflix, two seasons available): HGTV has nothing on this show, which follows the planning and construction of subjects across Britain building their dream homes, sometimes over the course of years. There are construction disasters, mental meltdowns, the threat of financial ruin, and — usually — an amazing new house at the end.

Of course there are plenty more out there — add your favorite comfort shows to binge in the comments section.

Mike Murphy is a MarketWatch editor and former TV blogger who still watches way too much TV. Follow him on Twitter at @mmmmurf or email your streaming questions to mmurphy@marketwatch.com.