In Australia, the ASX 200 gained 0.69%, with the Reserve Bank of Australia releasing the minutes from its latest meeting.

China’s Shanghai Composite inched down 0.07% while the Shenzhen Componentt inched up 0.01%.

The People’s Bank of China announced more measures to counter the economic impact of China’s latest COVID-19 outbreak. The central bank will release its loan prime rate on Wednesday after it reduced the reserve requirement ratio for most banks but not the interest rate on Friday.

St. Louis Fed President James Bullard said that interest rate hikes of 75 basis points, while not the base case, should not be ruled out as the central bank must move quickly to curb inflation. Chicago Fed President Charles Evans will speak later In the day, and will also speak alongside San Francisco Fed President Mary Daly a day later.

U.S. Treasuries steadied after the long end declined but remained near their highest levels in more than three years. A debate on whether inflation is peaking continues after U.S. natural gas prices climbed to the highest intraday level in more than 13 years and highlighted price concerns.

Supply chain disruptions thanks to China’s COVID-19 lockdowns and the war in Ukraine continue to keep upward pressures on prices. The World Bank also cut its forecast for global economic expansion for 2022 to 3.2% due to Russia’s invasion of Ukraine on Feb. 24.

“Yield spikes have often spelled trouble for stocks, but we believe the past is an imperfect guide in a world shaped by supply shocks,” BlackRock (NYSE:BLK) Investment Institute strategists, led by global chief investment strategist Wei Li, said in a note.

“We see central banks normalizing quickly – but not slamming the brakes on the economy. This should keep real yields low and underpin equity valuations.”

The war in Ukraine also intensified, with Ukrainian President Volodymyr Zelenskiy saying on Monday that Russia began its campaign to conquer the eastern Ukrainian region of Donbas. Russia continues to move troops and materials into the region.

In France, incumbent Emmanuel Macron and Marine Le Pen will take part in a presidential election debate ahead of the runoff vote on Apr. 24. Macron is currently slightly ahead of his right-wing rival after the first-round vote on Apr. 10. 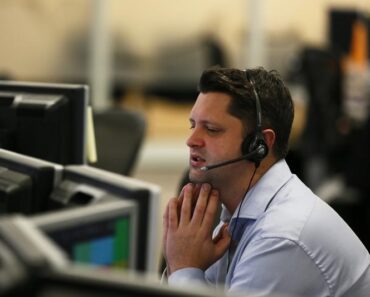