Home
Stocks
Therese Poletti's Tech Tales: This is your final warning — Chinese stocks listed in the U.S. are dangerous to hold
Prev Article Next Article 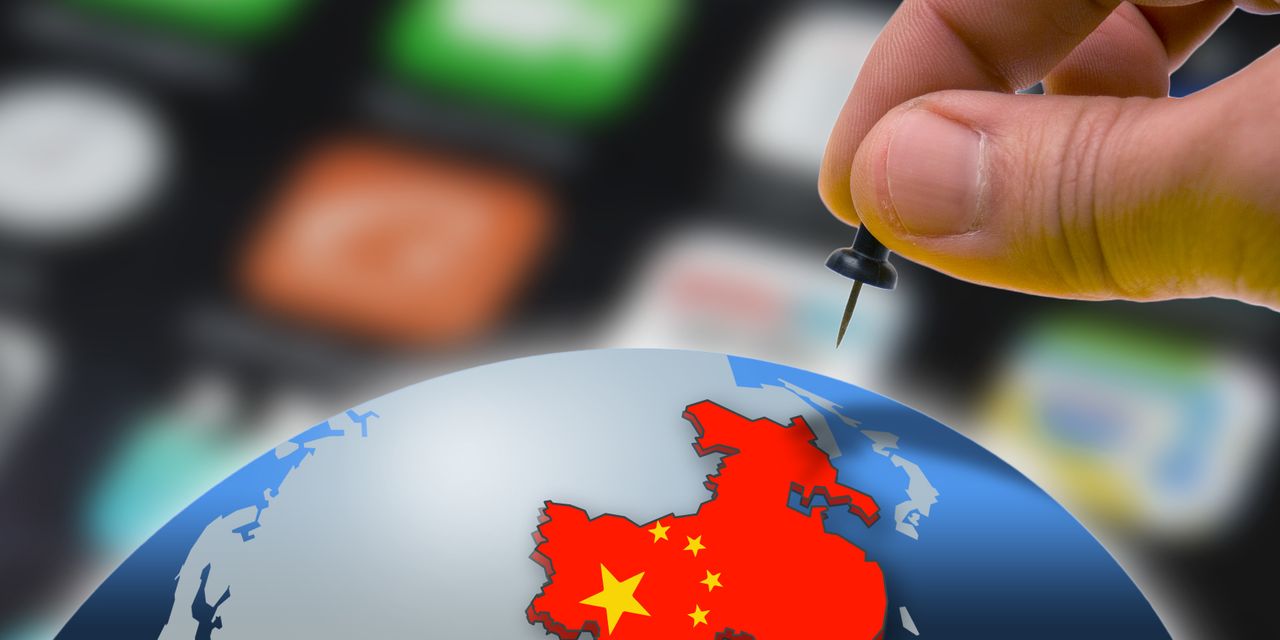 For years, this column has tried to warn individual investors about the perils of investing in Chinese companies going public in the U.S.

This, however, could be your final warning — a dark cloud hanging over Chinese stocks listed in the U.S. could lead to a storm that washes away investors’ funds, even those who are invested passively through mutual funds.

Recent moves from both the Chinese and U.S. governments could have Chinese stocks trading in the U.S. barreling toward delisting in the next three years. If that happens — and that remains a big if — experts say typical American investors could be left holding the bag when the music ends.

Legislation passed by congress late last year requires that foreign companies listed in the U.S. agree to an auditing inspection within the next three years or face delisting by American stock exchanges, part of a multiyear effort in Washington, D.C. to address the issue of the lack of rights U.S. investors have in these stocks.

of China, just weeks after its IPO on the New York Stock Exchange. On Thursday, a Bloomberg News report said that China is looking for other ways to punish Didi, including potential delisting or enforcing a state-owned investor on the ride-hailing company, as its shares fell more than 25% lower than the IPO price.

If China moves bring down Didi’s share price and it forces new investors on the company, it would look a lot like the scenario that Jesse Fried, a professor of law at Harvard University, laid out to MarketWatch early last week. Basically, he sees the opportunity for China to drive down the price of these companies before having rich Chinese investors take them private at a lower price.

“Chinese companies that list here often end up going private. The people who control a company they plan to take private may release bad news and withhold good news so the stock goes down, and then buy back the firm’s stock at a very low price,” Fried said. “This happens not only with Chinese go-privates, but also with American ones too. It won’t happen with a company like Alibaba BABA, which is too big to take private, but it can happen with smaller companies.”

One example he gave was Qihoo 360, which like most Chinese IPOs was domiciled in the Cayman Islands with a structure that gave U.S. shareholders no real voice. In late 2015, the company announced a deal to be taken private by a group of investors led by its CEO Zhou Hongyi, who had a 61% majority stake. The go-private deal valued Qihoo at about $9.3 billion, but after it relisted in Shanghai, its shares soared to a $56 billion valuation in 2017. Fried noted in this article in the Harvard Law School Forum on Corporate Governance that Quihoo’s CEO made $12 billion alone in relisting the company.

The valuations of most of the companies that have gone public in the U.S. are huge, but have declined since Didi felt the wrath of its home country, especially those that went public in recent years following the huge success of the Alibaba IPO. Prominent examples include iQiyi Inc.
IQ,
,
known as the Netflix Inc.
NFLX,

of China, which has fallen more than 18% in the past month; online-shopping app Pinduoduo Inc.
PDD,

has declined more than 11% in the past month and more than 40% so far this year; and online real-estate concern KE Holdings Inc.
BEKE,

has plunged more than 23% in the past month, through Thursday.

For more: These Chinese stocks could be hurt the most if the U.S. forces them to delist

That is far from a full list, however. As of May 5, according to the U.S.-China Security Review Commission, there were 248 Chinese companies listed on these U.S. exchanges with a combined market capitalization of $2.1 trillion. In the first half of 2021, according to Dealogic, 37 Chinese companies went public in the U.S., surpassing the 36 deals for all of 2020.

Many experts on China, including Fried, believe there will be more negotiation between the two countries to stave off the worst-case scenario for investors from happening.

“My gut sense is that China will try to reach some accommodation with the U.S. government. For now, China wants to keep the U.S. markets open and available for these young Chinese companies, which China’s undeveloped capital markets cannot adequately support,” Fried said. “And even though Congress likes to shake the anti-China rattle, there is a lot of interest on Wall Street in keeping this pipeline open, because of the huge IPO fees. “

The brinkmanship has accelerated in the battle between U.S. and China in recent years, however, and the two sides have very different motivations in this fight. China, a totalitarian Communist regime that wants to control every aspect of daily life in the world’s most populous country, is also clearly looking to halt the money fest in the U.S. of Chinese public offerings, and somehow get a piece of the pie.

More from Therese: Biden inherits a tech Cold War with China after Trump ratcheted up the battle

“There are two things going on here,” Harry Broadman, a managing director at the Berkeley Research Group, wrote in an email recently, before the latest Didi news. “Beijing is concerned about data security but not because they want to protect the populations’ data or privacy, but because Beijing wants to maintain their monopoly on data of the people. Information is power and Beijing does not want other people to have those kinds of data that in principle could be used to engender unrest.”

But now, since the U.S. passed the legislation sponsored by Sen. John Kennedy (R, Louisiana) late last year requiring foreign companies that went public in the U.S. to allow audit inspections in the next three years, the clock is ticking. It also represents an opportunity for U.S. investors to get out while they can.

“Since the Kennedy bill has passed, there is this other clock ticking,” said Lynn Turner, a senior adviser at Hemming Morse LLP and former chief accountant at the Securities and Exchange Commission. The Holding Foreign Companies Accountable Act will require the SEC to prohibit trading of securities of foreign companies in the U.S. markets after three consecutive years of non-inspection, if the Public Company Accounting Oversight Board (PCAOB) determines it cannot inspect a company’s audit work papers. That, though, is the worst-case scenario that many don’t expect.

“There are unlikely to be any de-listings of China-based issuers until 2025, with 2022 to be deemed the first non-inspection year,” said Shaswat Das, a lawyer at King & Spalding in Washington, D.C. who was chief negotiator for the PCAOB with the Chinese regulators from 2011-2015, in an email. “Despite the escalating tension between the U.S. and China in a number of areas, the passage of the legislation and its implementation by the SEC and the PCAOB may actually bring both parties…back to the bargaining table once again. There is too much to lose on both sides.”

But China’s ultimate goal appears to be twofold: to have the stocks of the big important growth companies trading back at home, under the watch of the Communist Party, and to better regulate or anticipate sketchy companies or frauds like Luckin Coffee LKNCY that went public here.

Opinion: Luckin Coffee shows how risky Chinese IPOs can be, but investors are just not listening

At some point in the future, Fried believes, “The Chinese government will stop letting the PCAOB inspect, or come up with another plan to herd all these companies back to China, once China’s own capital markets are sufficiently developed.”

He noted that if the Chinese government does refuse to cooperate with the PCAOB, some companies will probably go private and then probably relist elsewhere, like on the exchanges in Singapore, Hong Kong or London.

While many retail investors have been excited about the Chinese market and the potential in these stocks, passive investors could also get hurt, since China is an important emerging market for many fund managers.

Turner noted that the CII has been warning investors about the issues with these companies for years, but because of the huge returns, large asset managers aren’t too concerned about the risks.

“I talked to some of the largest ones, and asked them why are you investing in these things, sooner or later the chicken is going to come home to roost,” he said. “Their view is until that happens, and we are making enough money, we will continue to do it. We will make a lot of fees on it, and when it goes upside-down, it won’t be our problem.”

Turner said he believes most major investment funds have exposures to Chinese listings in the U.S., from Fidelity Investments to Vanguard. “Those funds need to be pressed very hard on what their strategy is for getting out of the Chinese companies that face delisting, if things don’t change,” he said.

While passive investors face risks, the real hurt could be reserved for retail investors who bet big on momentum stocks like Pinduoduo, NIO Inc.
NIO,

or a whole host of other Chinese companies. Some investors may already be starting to get nervous. So far this year, as of last week, Dealogic said the aftermarket performance of Chinese IPOs is down 2.76%, compared with a gain of 13.5% last year.

Turner believes there is too much risk for investors in this area. “I think American investors would be wise to hold back and not invest in any new Chinese companies, until we see this develop more in the next few years.”

With the new U.S. law in effect, and the potential threat of delisting looming, investors may have up to three years to examine their portfolios and take their profits. But even if the Chinese and the U.S. come to an agreement where auditors are able to look at the books of U.S.-listed companies, it isn’t necessarily going to stop the next Luckin Coffee from happening. The wisest move may be to get out while you still can.