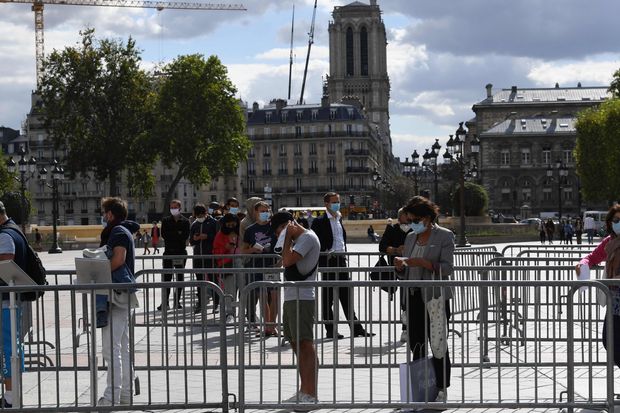 People wearing protective masks keep social distance as they queue to do a PCR test for Covid-19 in front of the city hall of Paris on August 31, 2020.

European stocks traded mixed on Friday, as investors searched for direction, eyeing a tense Brexit standoff and a warning from the European Central Bank over getting too complacent about a recovery in the eurozone.

Heading the other way, U.S. equity futures indicated a bounce ahead for Wall Street, notably for technology stocks, which have taken a sizable hit this week on fears the sector has gained too far too fast.

Data showed U.K. gross domestic product climbed 6.6% in July, recovering just over half of its lost output due to the pandemic.

The week has been a dramatic one in the U.K., which is headed to a standoff with Brussels after the government it said would amend terms of the withdrawal agreement. The EU is demanding the U.K. scrap those plans by the end of the month or put trade talks at risk. The pound GBPUSD, +0.18% has dropped over 3% this week.

Data out of Germany showed consumer prices falling in line with forecasts, by 0.1%. Meanwhile, the European Central Bank’s chief economist, Philip Lane warned in a blog post on Friday that there was “no room for complacency,” over the eurozone economy.

That came a day after the European Central Bank to hold monetary policy unchanged and lifted its estimate for the eurozone economy this year.

Among stocks on the move, shares of Altice Europe NV ATC, +25.11% shares soared 26% after the French multinational telecommunications corporation said founder and biggest shareholder Patrick Drahi would take the company private, buying shares he doesn’t own for € 4.11 a share.

Shares of Sodexo SA fell 1.2% after the French food-services and facilities company said its fourth-quarter performance was in line with forecasts, and that it could face pandemic-related costs of more than 400 million euros ($472.6 million) in the second half.