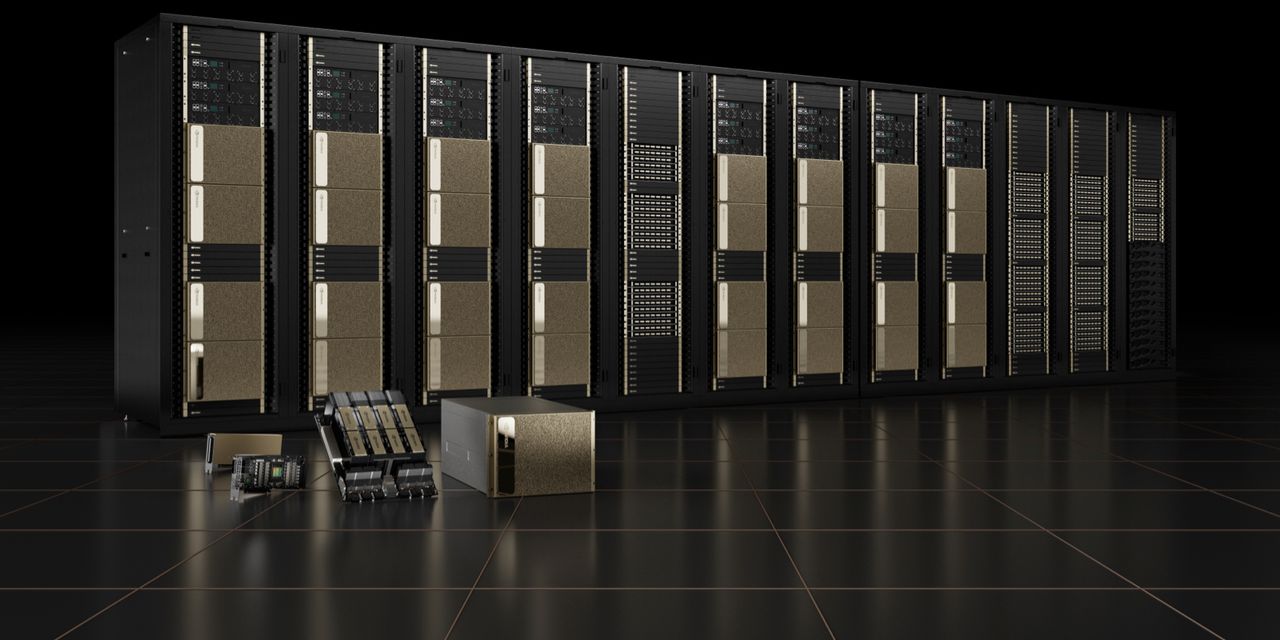 Nvidia Corp. shares fell in the extended session Wednesday after COVID shutdowns in China and the war in Ukraine shaved half a billion dollars off the chip maker’s outlook for the current quarter, while the company reported record results.

For the fiscal second, or current, quarter, Nvidia
NVDA,

forecast revenue of $7.94 billion to $8.26 billion, while analysts surveyed by FactSet have forecast revenue of $8.4 billion on average. The company said “Russia and the COVID lockdowns in China,” were responsible for an expected revenue shortfall of about $500 million in the current quarter.

That’s similar to Cisco Systems Inc.
CSCO,
,
which reported its earnings this past week and has an April-ending quarter like Nvidia. Cisco noted that it was broadsided after Chinese authorities locked down Shanghai starting on March 27, which threw a monkey wrench into its ability to get components. As a result, Cisco issued a poor outlook and shares saw their worst day in more than a decade.

“We estimate the impact of lower sell-through in Russia and China to affect our Q2 gaming sell-in by $400 million,” Kress said on the call, which would be about 11% of Nvidia’s current gaming sales.

In the first quarter, gaming sales rose 31% to a record $3.62 billion from $2.76 billion, while analysts surveyed by FactSet had expected Nvidia gaming sales of $3.46 billion. That revenue, however, is expected to pull back in the current quarter, further weakening Nvidia’s outlook.

“As we expect ongoing impact, as we prepare for a new architectural transition later in the year, we are projecting gaming revenue to decline sequentially in Q2,” Kress said. “Channel inventory has nearly normalized and we expect it to remain around these levels in Q2.”

“Now we’re having a better equilibrium between the supply that we have available and prices, not perfect yet, but near near normal levels of what we would like to see,” Kress told MarketWatch in an interview following the analyst call.

Lately, gaming cards have come down from the astronomical prices that were prevalent last year, when cards were often double their manufacturer’s suggest retail price, or MSRP. Compared with Nvidia’s RTX 3080 card with an MSRP starting at $699, a quick survey shows 3080 cards priced as low as $810 at Best Buy and $850 at Newegg. It should be noted that Kress confirmed that inventory was built before the China lockdown made sketchy supply chains even worse.

“But in total, Q2 gaming will decline from last quarter from Q1, that it will probably decline in the teens as we try and work through some of these lockdowns in China which are holding us up,” Kress said. “So overall, the demand for gaming is still strong: We still expect end demand to grow year-over-year in Q2.”

Meanwhile, Nvidia’s first-quarter data-center sales surged 83% to a record $3.75 billion from $2.05 billion in the year-ago period, while analysts had expected $3.6 billion. On the call, Kress told analysts the company sees “continued momentum going forward,” and that “customers remain supply constrained in their infrastructure needs.”

Read: The end of one-chip wonders — Why Nvidia, Intel and AMD’s valuations have experienced massive upheaval

“All of the these different factors, whether it’s just the industrial recognition of the importance of AI, the transformative nature of these new AI models, recommender systems, large language models, conversational AI, the thousands of companies around the world that are using Nvidia AI in the cloud driving public cloud demand,” Nvidia Chief Executive Jensen Huang told analysts on the call. “All of these things are driving our data-center growth, and so we expect to see data-center demand remain strong.”

Revenue surged to a record $8.29 billion from $5.66 billion in the year-ago quarter.

Read: Why semiconductor stocks are ‘almost uninvestable’ despite record earnings amid a global shortage

is scheduled to report on June 2.

Over the past 12 months, Nvidia shares are up 8%, while at the same time nearly 50% off their record closing high of $333.76 set on Nov. 29. In comparison, the PHLX Semiconductor Index
SOX,

is down 5%, and the Nasdaq Composite Index
COMP,