Lindizga Msiska was among thousands of people packed tightly into Njamba Freedom Park in Blantyre, Malawi, on May 25, cheering the opposition Congress Party in advance of elections scheduled for a month away. Like everyone there she dressed for the occasion, with earrings, an armband, and a pillbox cap all in the party’s trademark crimson — but no mask. She and others here described forgoing protection from coronavirus infection as a mark of political defiance.

“I’m not scared because this function is more important to me than the coronavirus, because you already have a coronavirus as president of this country,” she said. “So maybe we should first remove that one and then we’ll do it with the other coronavirus.” 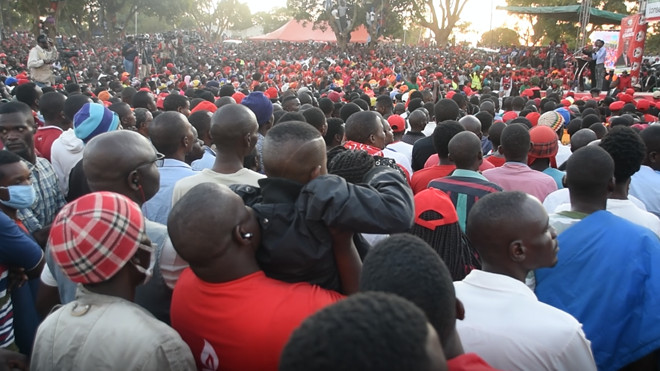 Thousands of people packed tightly into Njamba Freedom Park in Blantyre, Malawi, on May 25, 2020.

Supplied by the reporter

Msiska and her fellow protesters are part of a broad Malawian rejection of coronavirus protection-measures that has alarmed experts in a country that can ill-afford an outbreak because it is still struggling to recover from the last great pandemic, HIV. Coronavirus is in its incipient stages here but experts say disaster may loom.

Like elsewhere, Malawians are divided between health officials wishing to encourage social distancing and people who don’t believe the measures are necessary. The division here pits President Peter Mutharika, who has ordered a lockdown, against pro-democracy groups that allege the government’s plans jeopardize elections in June and don’t take account of the potential for economic hardship that closing down the country would lead to.

Now, tightly packed mass rallies of anti- and pro-government partisans are a routine feature of Malawi’s cities. Schools, businesses, bars and markets remain crowded as usual. Some churches in this highly religious country have relaxed social distancing measures, while others have given up on them altogether or even denounced them as being the work of the devil.

The stakes are high. Malawi, a landlocked country of 21 million people in southeastern Africa, is one of the world’s poorest nations. About 70 percent of the population live on less than $1.90 a day. There is inadequate sanitation, extreme hunger, and relatively scarce access to health care. The country has been hit especially hard by HIV: About one in 10 adults is infected with the disease that has orphaned a million Malawians. Some experts warn the initial response to COVID-19 has worrying parallels to what played out with HIV, when a culture of denial, misinformation, electoral politics and other competing agendas undermined the fight.

“I have to look back to our last 20 years of the global HIV response, and there are so many similarities,” said Dr. Charles Holmes, a Georgetown University medicine professor who was previously chief medical officer for the U.S. President’s Emergency Plan for AIDS Relief.

In an essay published on April 29 in Foreign Policy, Holmes was one of several contributors urging wealthy countries to come to Africa’s aid in fighting coronavirus. That was five days after Americans and Europeans working for embassies and foreign aid organizations left Malawi en masse on a coronavirus evacuation flight organized by the U.S. Embassy. The absence of managers from nongovernmental aid organizations and foreign governments has added to a sense of chaos.

“There is a huge leadership vacuum, where people are running the programs and calling the shots left to go back to their own country,” said Dedo N. Baranshamaje, who works for the Segal Family Foundation in Malawi.

Meanwhile, skepticism about whether there is real danger from the disease has been fomented by a seeming slow rate of infection. By May 28 the country had administered 3975 tests, with 203 recorded coronavirus infections and four deaths.

Some have speculated Malawi is protected by a mild climate, a population with an average age of 17.2, and a settlement pattern where 80 percent of people live in rural, largely subsistence farms. Malawi isn’t a travel or economic hub like, say, South Africa. Feelings that perhaps Malawi isn’t susceptible to the disease have fed into a belief that government containment measures are a political ploy meant to excuse possibly postponing the June 23 elections.

Read:Age is best explainer of coronavirus infection differences between countries but there is another surprising factor

Tyler Smith, who runs a Bill and Melinda Gates Foundation funded organization working on data analysis for Malawi’s health ministry, said regions and countries can become infected at different times during a pandemic. His analysis predicted Malawi will eventually see about 50,000 deaths from coronavirus a year, a worryingly high number given the size of the country. While only a projection, this echoes Malawi’s struggle with HIV. According to United Nations data, between 1990 and 2018 Malawi averaged 36,000 HIV deaths a year, with a 2004 peak of 66,000.

Much is still unknown about how the population will react to the disease, meaning projections could change. Scientists don’t know, for example, how coronavirus will affect people with the malnutrition and other ailments prevalent in Malawi.

“If you have unsuppressed HIV, tuberculosis, or malaria, your immune system is compromised,” Smith said.

“There was a lot of denial, conspiracy theories about HIV. There were influencers who would say, disease has been here before; people get diarrhea and other illnesses, and we have survived from time immemorial,” said Innocent Mofolo, country director for UNC Project-Malawi, an infectious disease research center run jointly by the University of North Carolina, Chapel Hill, and Malawi’s health ministry.

The current low rate of infection is a snapshot that doesn’t give a full picture of the disease’s spread, in part because “the testing capacity is not there,” Mofolo said.

“I’m seeing the same kinds of attitudes now with coronavirus. But it’s the politicians who are older, and they saw all that which we’ve gone through. But they’re not paying attention.”

During the peak of the African HIV crisis in the 1990s, artisans who made furniture and other businesses switched to making coffins, and their shops would line the streets.

“Here in Lilongwe they call it ‘coffin alley,’” said Mofolo.

Holmes recalled that a significant portion of his work helping lead America’s efforts to fight HIV in Africa involved bringing religious leaders on board. The same will likely be true in Malawi’s fight against COVID-19. Religion is an important part of daily life for 99 percent of Malawians — no country is more religious, according to a Gallup survey of global religiosity. Pastors have been talking from the pulpit about the potential danger of coronavirus. But some faiths continue with services.

“It required the hard work to speak with religious leaders not once, not twice, not five times, but many times, to help them understand and to show them data, and get them to be allies in the public health fight,” he said.

Malawi’s response to the COVID-19 pandemic is also wrapped up in a political dispute that gained momentum in February, just as the coronavirus was becoming a global disease outbreak. A Malawian court cited evidence of voting irregularities in annulling the previous spring’s presidential elections, calling for a fresh vote to be scheduled for June 23. On April 14, President Mutharika announced a 21-day lockdown that would begin on April 18. But the Human Rights Defenders Coalition, an umbrella group funded in part by George Soros’ Open Society Initiative for Southern Africa, successfully petitioned for an injunction, saying the lockdown hadn’t accounted for the economic hardship it would cause.

“We are not against the lockdown per se. Lockdown itself has proven to be a solid strategy in terms of controlling the spread of the disease, the coronavirus,” said Luke Tembo, spokesman for the Human Rights Defenders Coalition. “We can’t afford to watch them locking down the whole country, for 21 days for example, and then leave the population and the masses without any measures that would cushion them from the effects.”

“I think that the injunction that was taken against the lockdown has significantly contributed to the change of attitudes of people negatively,” he said. “Without life you can’t vote. So the government will continue to put the health of the people ahead of everything.”

But the injunction became a rallying point for popular concerns that government anti-coronavirus measures were a ploy for retaining power.

“Malawi as a country is not scared of coronavirus because the state of affairs in this country is much worse than coronavirus,” said Balawala Vingula, a young man attending the Freedom Park rally in a pressed suit, tie and no mask. “People are tired of ill health, and they’d be better off to die from coronavirus and change the regime.”

“At the end of the day, these are people that have suffered under Mutharika. And they’ll cross rivers that are infested with crocodiles just to ensure that they get to where their hope is,” said Moses Kunkuyu, a Congress Party campaign director. “That’s why you see people behaving in this way.”

As pro-government sympathizers responded with their own rallies, the health ministry’s messages of social distancing, quarantine, sanitizing and refraining from large gatherings have lost their power, especially in a country where the cost of a mask and sanitizer buys a day’s food for a family.

“At the market, you find people are there doing business as usual. People in the villages, they’re using communal toilets, and communal water sources,” said Mofolo.

“For most people in the villages I don’t think they have the choice. They have to go on a daily basis to the market to buy food. They have to do all those interactions. And it’s business as usual.”