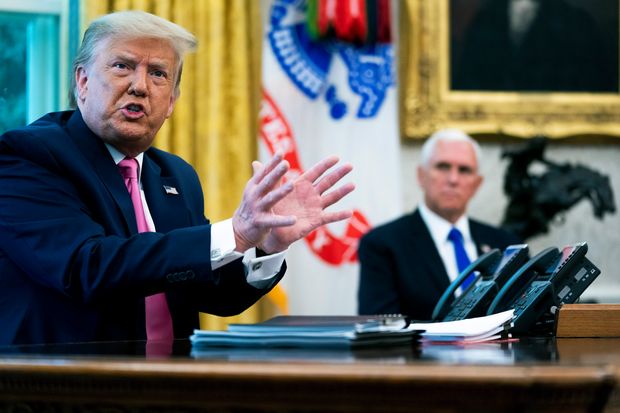 President Donald Trump talks to reporters with Vice President Mike Pence in the Oval Office at the White House on Monday.

President Donald Trump said Monday he’s resuming regular coronavirus briefings, bringing them back as cases spike and more Americans disapprove of his handling of the pandemic than approve.

A Washington Post-ABC News poll released last week found that Americans’ views of Trump’s handling of the outbreak have deteriorated. The survey showed 38% approved of his handling of the pandemic, down from 46% in May. Sixty percent disapprove, up from 53% in May. In a Quinnipiac University poll released July 15, two-thirds of respondents said they didn’t trust information Trump was giving about the coronavirus.

Trump hasn’t participated in such a briefing since late April. Speaking in the Oval Office on Monday, he called the briefings “a great way to get information out to the public as to where we are with the vaccine, with the therapeutics and generally speaking where we are.”

The briefings ended after Trump was criticized for appearing to suggest the virus could be treated with disinfectants.

White House counselor Kellyane Conway had pushed for Trump to resume giving the briefings, as approval of his handling of the pandemic sunk in polls, as the Hill reported.