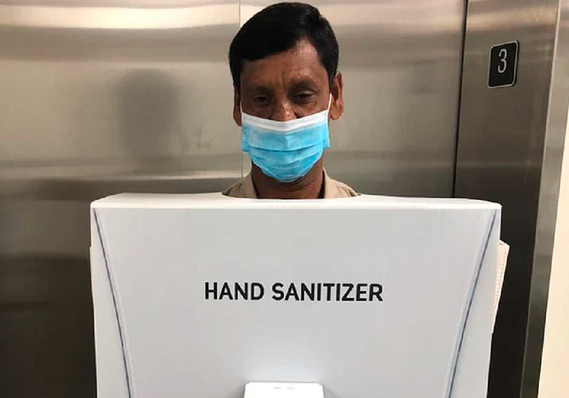 Somebody at Saudi Aramco thought this was a good idea.

Social media, however, did not, and outrage exploded across Twitter TWTR, -8.77%  , with accusations of racism, injustice and “modern-day slavery” dominating the discussion:

Outrageous and that guy in the suit compounded his injustice by actually using the gel, it must be so humiliating for that victim.

The humiliation & rendering of some lives as disposable apparently has no bounds. Aramco’s apology should be noted but the fact that someone in leadership thought this was appropriate to begin with speaks volumes about the public perception of migrant workers in the gulf. https://t.co/HOD21jjsxI

Picture shows an Indian employee dressed up as a mobile hand sanitizer for the convenience of #ARAMCO’s American executives. https://t.co/RuCFNKR5NY

coronavirus has really brought out some disgusting classism and racism 🙁 https://t.co/M6riaZkmFQ

Saudi Aramco responded by saying in a tweeted message that it didn’t approve of the stunt and apologizing for the “abusive behavior” toward its worker. “The company immediately stopped this act and took strict measures to prevent it from happening again,” the statement said.

Meanwhile, Saudi Aramco 2222, +9.88%  , which took the top spot as the world’s most valuable publicly traded company after hitting the market late last year, has other problems on its plate. Last Sunday, the stock dropped below its initial public offering price for the first time ever, after OPEC and non-OPEC allies couldn’t agree on how much oil production to cut. The company said on Tuesday it would boost crude available to customers to 12.3 million barrels a day in April.

Looking ahead, the potential for a Saudi-Russia price war combined with concerns about the economic impact of the coronavirus outbreak suggests that the oil CL00, -3.61% market could remain choppy for the foreseeable future.