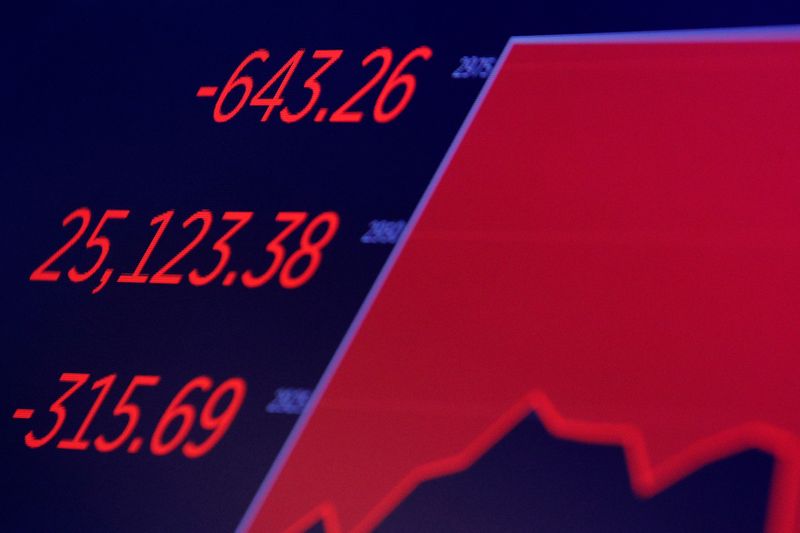 © Reuters. A screen shows the Dow Jones Industrial Average during trading on the floor at the NYSE in New York

New York (Reuters) – The S&P 500 fell for the seventh straight day on Friday and the benchmark index suffered its biggest weekly drop since the 2008 global financial crisis on growing fears the fast-spreading coronavirus could push the economy into recession, although stocks regained some ground right at the end of a volatile session.

The Dow and the Nasdaq also registered their deepest weekly percentage losses since October 2008.

But, after the bell, were up about 1% and the Invesco QQQ Trust ETF was up 1.3% in extended trade.

On Thursday, all three indexes had confirmed corrections by finishing more than 10% below their closing record highs.

Equities found some support after U.S. Federal Reserve Chair Jerome Powell said the fundamentals of the American economy remained strong and that the central bank would act as appropriate to provide support.

But investors had spent most of the day dumping equities for the safety of U.S. Treasuries, pushing 10-year yields to their fourth record low this week. [US/]

The virus spread further on Friday, with cases reported for the first time in at least six countries across four continents, battering markets and leading the World Health Organization (WHO) to raise its impact risk alert to “very high.”

Some investors voiced concerns about heading into a weekend where they could not trade on new reports about the virus.

“To get an all-clear sign, the market needs evidence it’s under control, no flaring up in new countries and that we don’t get a significant outbreak in the United States,” said Jack Janasiewicz, chief portfolio strategist for Natixis Investment Managers.

Janasiewicz saw the spread of the virus China as a prompt to reduce exposure to riskier assets, and said the next milestone for further risk cuts would be a U.S. outbreak.

Of the S&P’s 11 major sectors, the rate-sensitive financial index () weighed the most on the benchmark S&P 500 index, ending the day down 2.6%. The utilities sector () was the S&P’s biggest percentage loser with a 3.3% drop. Real estate <.SPLRCR> and consumer staples () – also rate-sensitive sectors that are often seen as safe havens – both fell more than 2%.

Yet the energy (), technology () and communications services index () all showed gains for the day.

Declining issues outnumbered advancing ones on the NYSE by a 3.39-to-1 ratio; on Nasdaq, a 1.95-to-1 ratio favored decliners.

Trading was brisk on U.S. exchanges with 19.31 billion shares changing hands compared with a 9.25 billion-share average for the last 20 days.