Home
Stocks
Rex Nutting: Is greed holding back a drug that could treat COVID-19 patients?
Prev Article Next Article 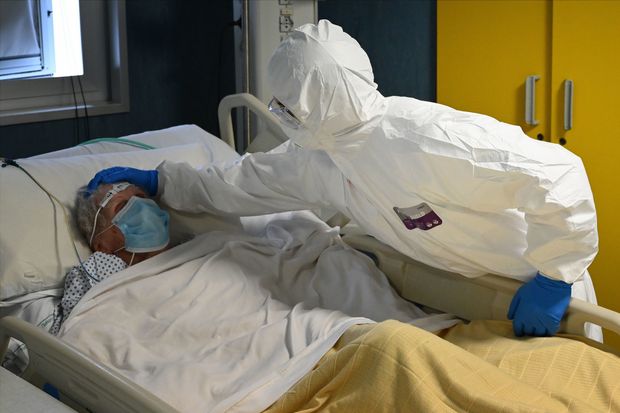 A health-care provider comforts a COVID-19 patient in an intensive care unit.

Greed is the great motivator in our economy. It prods people and companies to constantly strive to innovate, to create new and better products with the hope of earning fabulous riches.

But greed doesn’t always work the way the textbooks teach it. In the real world, companies that maximize profits don’t always improve the lives of consumers, contrary to what you might have learned in Econ 101 from reading Adam Smith’s musings about how it is the greed of bakers—not their benevolence—that gives us our daily bread.

Even Smith recognized that his invisible hand dematerializes once a company gains monopoly power; for instance, by controlling patents, as Gilead Sciences GILD, -0.16% does.

In a time of global pandemic, Gilead—with its suite of antiviral drugs—is sitting on a gold mine. One of its drugs, remdesivir, has been proven to be effective in shortening hospitalizations of COVID-19 patients. It’s not a panacea, but it is better than nothing.

But Gilead may have a better drug in its pipeline that it won’t sell, a compound known as GS-441524 that is closely related to remdesivir and which, limited studies suggest, could be cheaper and more effective as a treatment for COVID-19.

The consumer watchdog group Public Citizen charged Tuesday that the company refuses to test and develop GS-441524 because selling the inferior drug remdesivir is more profitable. (Gilead did not respond to a request for a comment.)

In other words, Gilead owns a gold mine, but it will only sell us the tin it unearths. It leaves the gold in the ground, because the inferior metal is more profitable.

“It is unclear why Gilead and federal scientists have not been pursuing GS-441524 as aggressively as remdesivir, but the answer may be found in the corporation’s patent holdings,” Public Citizen said in a letter sent to the company and to top federal health officials. “The corporation’s monopoly over remdesivir may last five years longer than that for GS-441524, allowing Gilead to make substantially greater profits from the sale of remdesivir as a COVID-19 treatment.”

Two medical researchers signed on to Public Citizen’s complaint. In an opinion column published by Statnews.com in May, Florian L. Muller and Victoria C. Yan of the University of Texas’s MD Anderson Cancer Center urged the company to “ditch remdesivir and focus on its simpler and safer ancestor.” They also speculated that Gilead was giving remdesivir more attention because of potential monopoly windfall profits instead of thinking about potential benefits for public health.

In their op-ed and in a paper published in June by the American Chemical Society, Muller and Yan argued that manufacturing GS-441524 is much less complicated than making remdesivir and that it probably works better. “The benefit of using GS-441524 over remdesivir is that GS-441524 can almost certainly be given at much higher doses due to its lower toxicity,” they wrote. It could be a more effective therapy for many more patients, they theorized.

The two drugs are quite similar. “Remdesivir has a small but clever modification that makes it better at entering cells, but it and GS-441524 work in exactly the same way to inhibit viruses,” Sarah Zhang summarized in a story she wrote for The Atlantic.

But no one knows for sure if GS-441525 will work in human patients. No one even knows if GS-441525 is safe for humans, because it has never been tested.

This isn’t the first time Gilead has abandoned GS-441524 despite its promise as an antiviral. Although the company has not sought approval for veterinary uses, a large and highly illegal black market for the drug (mysteriously sourced from Chinese bootleggers for $7,000 to $12,000 per course of treatment) sprung up after researchers found it to be safe and very effective in treating an otherwise fatal disease in cats that’s caused by a feline coronavirus related to the coronavirus that causes COVID-19 in humans.

“The company has refused to license GS-441524 for animal use, out of fear that its similarity to remdesivir could interfere with the human drug’s FDA-approval process—originally for Ebola,” Zhang wrote in her Atlantic story about the bizarre black market for GS-441524 among cat lovers.

Zhang explains: “Because GS-441524 and remdesivir are so similar, any adverse effects uncovered in cats might have to be reported and investigated to guarantee remdesivir’s safety in humans. Gilead’s caution about generating unnecessary cat data is standard industry practice.”

Ah ha! Now we may be getting closer to solving the mystery. For a patent holder, ignorance is sometimes more profitable than knowledge.

It seems that “standard practice” in the drug industry directly contradicts the Constitution’s reasons for granting intellectual property rights. Instead of promoting “the Progress of Science and useful Arts,” patents too often serve to retard the advancement of science and useful arts, such as medicine.

In this case, retarding the advancement of knowledge is causing great suffering among both humans and cats.

I can hear your objections already. Gilead discovered these drugs and has the absolute right to do whatever it wants with them, just as a poet has the right to burn their verses. The world is poorer for it, true, but “it is what it is.”

These are strong moral arguments, but they ignore the fact that you and I paid for at least some of the discovery of these drugs. We should own at least a stake in them. The federal government gave Gilead at least $70 million to develop antiviral drugs to save lives and reduce suffering, not to enrich Gilead’s managers and shareholders.

Gilead has great scientists and researchers and they should be amply rewarded for their success. Gilead should earn a fair profit for its work, but it should not get an unearned windfall, and it should not be able to lock up promising drugs merely because it is greedy. The public paid for the discovery of GS-441524 and remdesivir, and that intellectual property should be in the public domain.

By the way, the argument for public control of intellectual property funded by the public also applies to the billions of dollars that governments here and in Europe have given to various companies and organizations to develop vaccines for COVID-19. And it also applies to the hundreds of billions the public has invested in other drugs and medical treatments.

The money was given to solve a problem, not to reward greed. Because greed isn’t always good.

Rex Nutting has been covering economics and politics in Washington for more than 25 years.

Richard Haass: How nationalism could ruin the COVID-19 vaccine

Mariana Mazzucato: How to make sure the drug companies don’t make off like bandits as we develop a COVID-19 vaccine

Joseph Stiglitz: Should patents come before patients? How drug monopolies hamper the fight against coronavirus