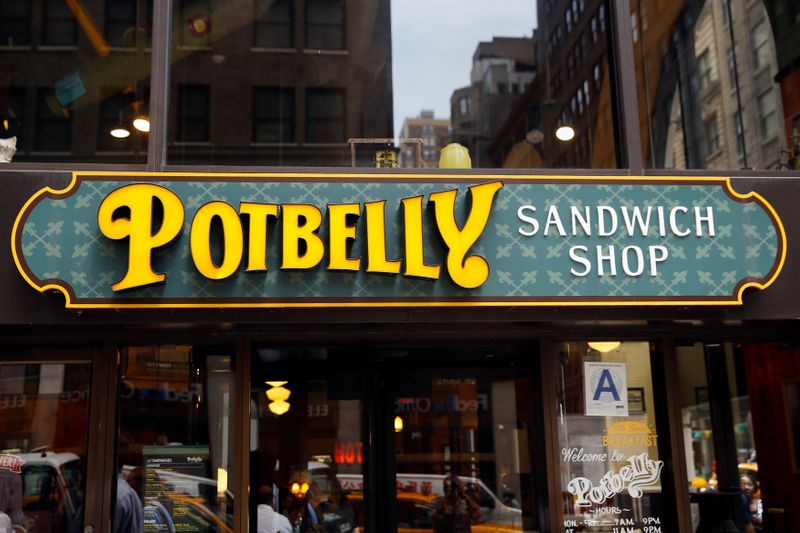 BOSTON (Reuters) – Sandwich maker Potbelly Corp (O:PBPB) on Monday promised to reimburse activist shareholders’ expenses with stock not cash, creating a situation that lawyers call an outlier for now but which they said could find traction in tough economic times.

The two sides reached a settlement that looks routine for the times with two board seats going to the activist group led by Vann Avedisian while the company’s directors keep their jobs.

Buried in a regulatory filing, however, is a twist that discloses Potbelly’s plan to issue 130,000 shares as “reimbursement for all documented out-of-pocket costs, fees and expenses (including attorney’s fees and other legal expenses).” Traditionally reimbursements are made in cash, with some activists even asking companies to pay lawyers and others directly to avoid any whiff of conflict.

Monday’s settlement may be the first ever to repay expenses with stock, say lawyers and industry analysts, and it comes as Potbelly is among millions of restaurants forced to close dining rooms and offer free delivery to limit the spread of the novel coronavirus.

“It is unusual to have expenses reimbursed in stock rather than in cash,” said Aneliya Crawford, a partner at law firm Schulte Roth & Zabel, which often advises activist investors.

Crawford and other lawyers agree this “unorthodox arrangement” was likely fueled by Potbelly’s need to preserve cash. Last week the Chicago-based company, which is worth roughly $73 million, said it lacks the necessary staff to prepare earnings on time and is renegotiating its debt covenants with lenders. Last month it had to return $10 million in government funds designed for small businesses to make payroll and rent payments.

Potbelly was advised by law firm Sidley Austin while Cadwalader, Wickersham & Taft represented the investors. Neither firm responded to requests for comment.

Lawyers also noted some investors might worry the reimbursement in stock is tough to value at a time Potbelly’s stock has been falling and that it would dilute their holdings and strengthen the dissidents’ hand.

Many companies try to cap the amount of stock owned by activists during their negotiated standstill period.

For Potbelly, however, there may have been no other option, lawyers and investors said, noting its stock price has fallen by more than half in the last year and that restaurant chains have been especially hard hit by the pandemic.

The issuance involved less than 1% of Potbelly’s outstanding shares.

Several lawyers said that although the reimbursement arrangement is an outlier now and that most companies would prefer to pay back, issuing stock is now an option that executives could ask activists to take as part of an agreement.