The first-quarter earnings of Noble Energy, Inc. (NBL), an independent exploration and production company, were presented on May 8. The analyst community failed to predict its quarterly revenue, which fell to $1.02 billion vs. $1.052 billion in 1Q19. However, adjusted earnings per share were in line with expectations of Wall Street, which signifies the company’s cost-saving efforts instated to bolster margins amid depressed commodity prices have been bearing fruit.

On a negative side, the company’s profit was still sub-zero, dragged down by impairment and exploration expenses. LTM GAAP net income has been negative since 2018; according to analysts, the possibility of returning back to profitability before end-2021 is close to zero (see the forecasts). Another dangerous sign is that free cash flow was also negative despite capex savings. Being FCF negative, NBL paid a dividend.

I was bullish on NBL in September 2019; since then, the share price had more than halved, dragged down by the coronavirus crisis and its impact on the commodity markets. 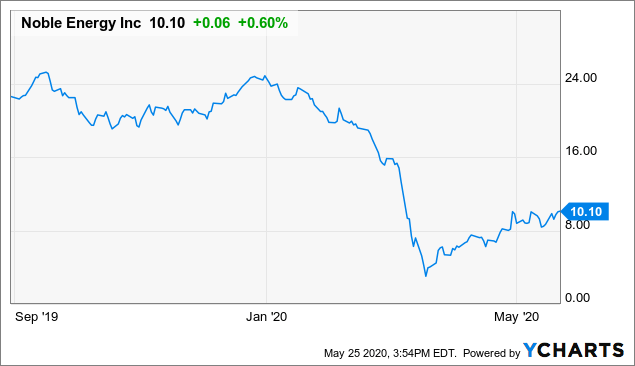 However, I am still bullish on the long-term prospects, as the Leviathan gas field offshore Israel secures revenue growth.

In the first quarter, Noble’s total revenue fell 3% to $1.02 billion; sales of oil, NGL, and gas were down 4.6% vs. 1Q19 and amounted to $894 million despite higher hydrocarbon volumes sold. Importantly, a $389 million gain on commodity derivative instruments made a solid contribution to sales but did not impact cash from operations and FCF.

While in 1Q19 the company sold 337 kboepd on average (including equity investments), in the 1Q20, this amount rose to 390 kboepd thanks to the start-up of the giant Leviathan gas field offshore Israel and higher production from the U.S. onshore assets, especially in the DJ and Delaware Basins, where NBL commenced production from 51 new wells.

Apart from volume, another principal driver of revenue of a basic materials company is average selling prices per unit. Crude oil & condensate price was down 15%, natural gas liquids price plummeted 42%, and natural gas price dipped 10%. But upon deeper inspection, the realized prices were generally favorable, and NBL 1Q revenue did not reflect the March oil market catastrophe that emerged from the coronavirus pandemic and the oil price war.

In the U.S. (including DJ, Delaware Basins, and the Eagle Ford), Noble generated $46.1 a barrel of crude oil and condensate. That is well below the 1Q19 price of $53.46 but still expensive enough to cover opex and finance investments.

An interesting fact worth touching upon is that during the quarter, in the Eastern Mediterranean, the company sold one barrel of oil & condensate daily for just $25.2 (see page 26 of the Form 10-Q). I did not find any clarification in the notes why crude was so cheap, but perhaps the timing of delivery (and not quality/API gravity as a reader might guess) was the fundamental culprit of the unattractive price, precisely as in the case of the Guyanese crude from the Stabroek Block sold by Hess Corporation (HES) in March (I briefly touched upon it in the recent article). Anyway, it is just the author’s surmise.

Interestingly, the company sold its natural gas produced in the Eastern Mediterranean at a hefty premium to natural gas produced in the DJ, Delaware Basins, and Eagle Ford in the U.S.; in Israel, the commodity was about 4.2x more expensive. The explanation here is that the majority of the price in the Israeli contracts is fixed and linked to Brent, so that is why revenue generated from Tamar and Leviathan is more stable and predictable.

To rewind, in the March quarter, natural gas prices in the U.S. were pronouncedly weak due to warmer-than-normal temperatures and tumbled space heating demand. The silver lining is that the Energy Information Administration is expecting the Henry Hub spot price to rebound in the second half of 2020 and remain resilient in 2021 on the back of supply reduction, which, in turn, is a consequence of capex decline trend in the U.S. shale plays. In May STEO, the EIA forecasted the benchmark spot prices would average around $2.14 per MMBtu in 2020 and then would edge to $2.89 per MMBtu. As NBL generates a material share of the revenue from U.S. natural gas (around 22% in 1Q20), stronger prices should bolster its top line and slightly offset the impact of the cheap West Texas Intermediate crude oil.

In the previous article, I pointed out that the Leviathan gas field located off the coast of Haifa is at the crux of the company’s long-term growth story and shareholder value creation. I also enumerated a few trends in the Israeli economy and energy mix that should support resilient demand for natural gas in the 2020s and beyond. This year, the company’s growth story has begun to slowly materialize, but the oil market collapse made the 2020 revenue growth impossible and hamstrung the company’s expansion prospects. For a broader context, its partner Delek Drilling has recently warned it sees the 2020 revenue from the Tamar and Leviathan fields would be 10% to 20% lower than initially expected. It also said the 2021 revenue will be 5% to 15% below previous estimates. Still, I believe long-term energy consumption trends are secure.

So, while the revenue slipped even despite higher production, Noble Energy had to figure out how to buttress margins and turn an operating profit. Its strenuous cost-saving efforts bear fruit; G&A expenses were even $8 million lower than NBL initially guided. The company also managed to reduce interest by around $2 million. However, it did not help to turn a profit, as impairment shattered operating margin.

As crude oil prices edged to historical lows, NBL had to make a thorough review of its oil & gas properties and assess if their value must or must not be reduced because of lower future cash flows. Unfortunately, a sizeable part of its hydrocarbon assets failed the impairment test, and it booked a gargantuan non-cash expense that was even higher than quarterly revenue and equaled $2.7 billion. Another painful blow was from exploration expenses. An over $1.5 billion expense recognized in Q1 was also the consequence of weak oil prices that led to a reduction in the value of certain assets. In sum, GAAP EPS slumped to $(8.27), while LTM GAAP loss reached a decade record.

Of course, non-cash expenses did not impact net cash from operations. Yet it does not mean it was robust; it fell by 8.7% YoY and did not cover total capex. 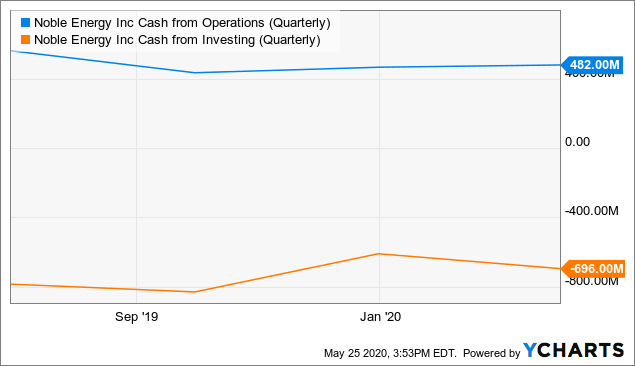 Measures to cope with the oil price crisis

NBL followed the suit of other petroleum industry players and radically slashed its 2020 capital investment budget. 2020 capex were reduced by 53%, as U.S. onshore activities were deferred until WTI price returns to comfortable levels.

Of course, while capex reduction will help to survive the economic downswing, it will also take a toll on production growth prospects.

One of the principal matters that investors should assess during crises like the current is liquidity and solvency. There are a few value opportunities in the E&P industry right now; however, an investor must assess the creditworthiness of a company to make sure it is not on the cusp of a precipice, as it is a precarious decision to invest in an impecunious firm.

In Q1, NBL’s financial position deteriorated, as debt climbed higher while equity cratered because of impairment; as of end-March, total consolidated debt/shareholder equity was above 164%.

On a positive side, the company has no significant near-term maturities (the closest is in 2023, see slide 5) and only one financial covenant of the credit facility: debt-to-total capitalization less than 65% (as the company clarified in the notes, the methodology of calculation was defined in the RCF agreement). NBL ended the March quarter with around 35%. Also, it had $1,397 million in cash & cash equivalents. All in all, the financial position looks relatively robust, but there is room for improvement.

The oil market has entered into a recovery phase. The world is returning back to normal, while crude supply is gradually falling. The Baker Hughes data presented recently have illustrated that the U.S. active drilling rig count decline trend had not bottomed yet. Cash-strapped oil players are still not ready to return to growth. Production from the Permian and Bakken Formation has gone into a tailspin. All these are supportive of the WTI and Brent price recovery.

In this sense, and also because of the prospects of the Leviathan gas field, NBL remains an energy stock worth considering for long-term-oriented investors.