Home
Stocks
Need to Know: The stock market won’t get what it needs to keep the rally going, warns SocGen strategist
Prev Article Next Article

We’ll find out later with U.S. jobless claims that could reveal up to 25 million Americans have been forced out of work due to the coronavirus crisis. That is after some bleak Europe purchasing managers index (PMI) data got the day started:

The S&P 500 SPX, +2.29% has rallied about 25% since March 23, sparking endless debate about the sustainability of those gains against the continuing fallout from the virus, with the Nasdaq Composite COMP, +2.80% still in the lead year-to-date.

Our call of the day, from Société Générale’s multiasset strategist Sophie Huynh, says investors have likely gotten ahead of themselves. That is because the rebound has focused on technology, health-care and staples sectors, which benefit from a low-interest rate environment, easy monetary policy conditions and work-from-home trends, she said.

“I think there might be some limited upside at this point, because we would need to see a rotation out of those long-duration stocks into more cyclical ones like discretionary, energy, industrial, reflective of growth actually picking up and really a V-shaped recovery being priced in, rather than this tech-led recovery, which in my view is not sustainable,” Huynh told MarketWatch.

And despite the correction markets have seen this year, there is a way to go before reaching the “fully risk off” stage, she cautioned.

Huynh is keeping a close eye on a proprietary indicator that tracks positioning of big money managers over a range of perceived riskier assets, and so far they are not throwing in the towel. “What we’re seeing at the moment is there are no signs of capitulation compared to levels seen in 2008, but there’s some risk-off that’s settled in,” she said. 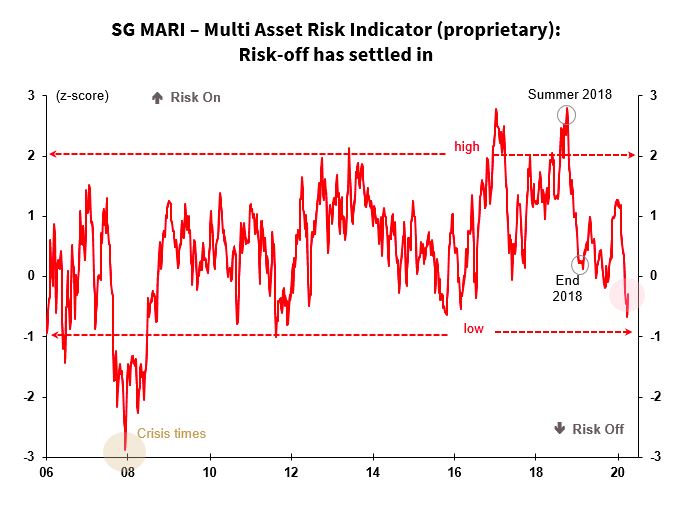 “That’s why we’re being much more discriminate, we like credit over sovereign bonds, we still have some equities,” said Huynh, but added that a balanced portfolio makes more sense than too much emphasis on equities right now.

“One thing we’re pushing for is credit, which we significantly upgraded from 5% to 23% in our portfolio because we think that the monetary policy cushion is going to be there and if you have growth adding on the fundamentals, then there’s going to be tremendous performance,” she said.

“Is greater economic uncertainty an insurmountable headwind for stocks?” BTIG strategists Julian Emanuel and Michael Chu answer that with this chart: 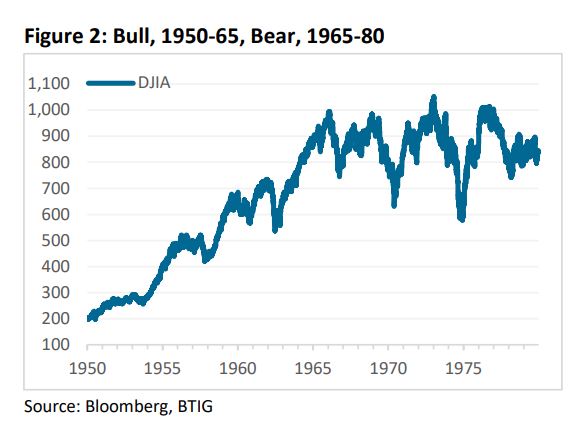 Forecasts of the pandemic-driven economic volatility ahead echo the 1950 to 1980 years, say the strategists. But stocks “rose in a secular bull market throughout the 1950s and mid-1960s; it is only when inflation began to spiral out of control that the malaise of the late 1960s and 1970s dominated,” says BTIG.

Data could show another 4 million filed for unemployment, with Markit PMI manufacturing and services indexes and new home sales also on tap.

The head of a federal vaccine agency said he was kicked out for opposing a malaria drug touted by President Donald Trump. Meanwhile, even Trump criticized Georgia for reopening its economy too soon, while a former dogbreeder with minimal health experience is reportedly leading the U.S. pandemic response.

EU leaders will get together for another videoconference on Thursday to discuss the tough topic of a unified fiscal response.

Bored museums’ #CreepiestObject competition is on!

Need to Know starts early and is updated until the opening bell, but sign up here to get it delivered once to your email box. Be sure to check the Need to Know item. The emailed version will be sent out at about 7:30 a.m. Eastern.