The difference between greed and ambition is a greedy person desires things he isn’t prepared to work for.”― Habeeb Akande

Today, we take our first look at a biotech company that just came public two years ago. Like so many in this space, the shares sell significantly under the price they initially debuted on the market. Our in-depth look at this small developmental company is presented in the paragraphs below. 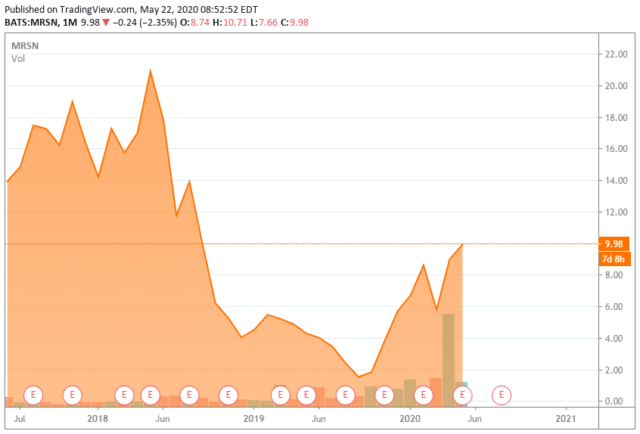 Mersana Therapeutics, Inc. (MRSN) is a Cambridge, Mass.,-based early clinical-stage biopharmaceutical company with a focus on improving oncology outcomes through the development of antibody drug conjugates (OTCPK:ADCS). The company has a new early-stage lead candidate (XMT-1536) in a Phase 1 study and a second (XMT-1592) that it hopes to enter into the clinic in 1H20. The company’s previous lead candidate, XMT-1522, was scrapped after safety issues and uninspiring data compelled former collaboration partner Takeda (TAK) to abandon the program mid-trial. Mersana was formed in 2001 and went public in 2017, raising net proceeds of $68.1 million at $15 a share. Its stock currently trades around $10.00, equating to a market cap of ~$600 million. 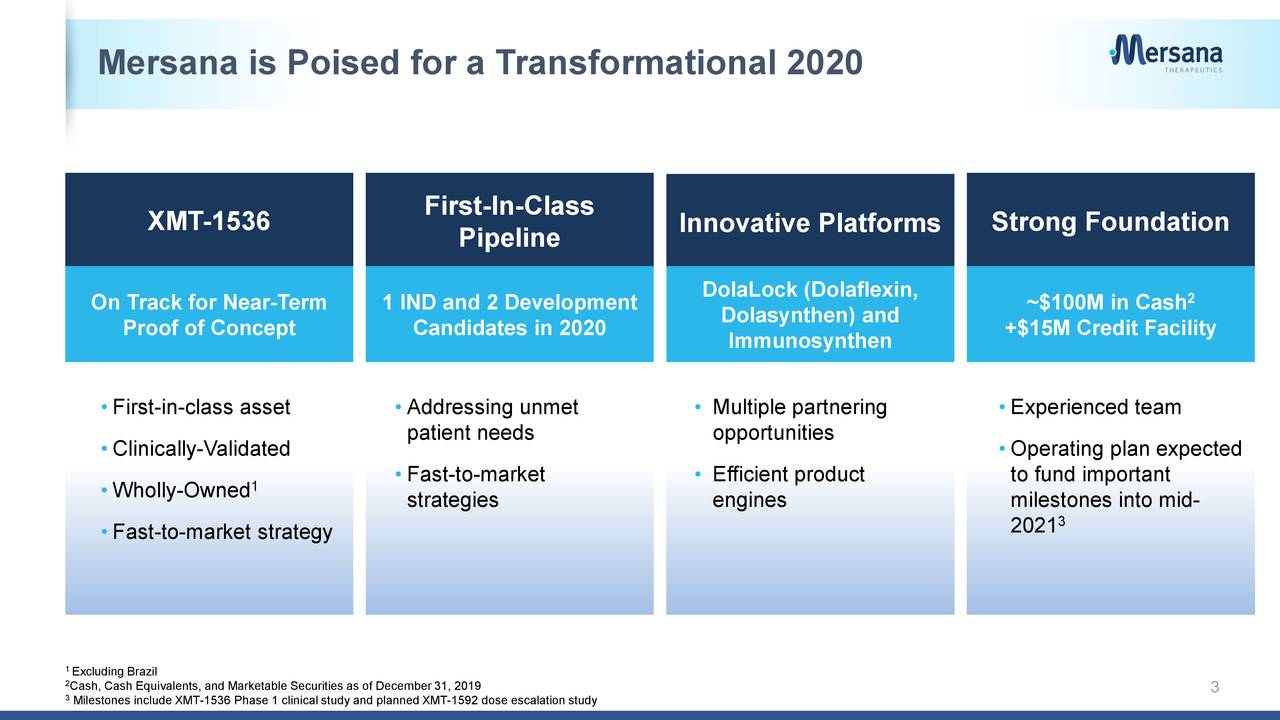 ADCs are antibodies attached to chemotherapeutic payloads via a chemical known as a linker. The ADC is designed to attached to specific tumor cell surface antigens, allowing it to enter the cancer cell and deliver chemotherapy. 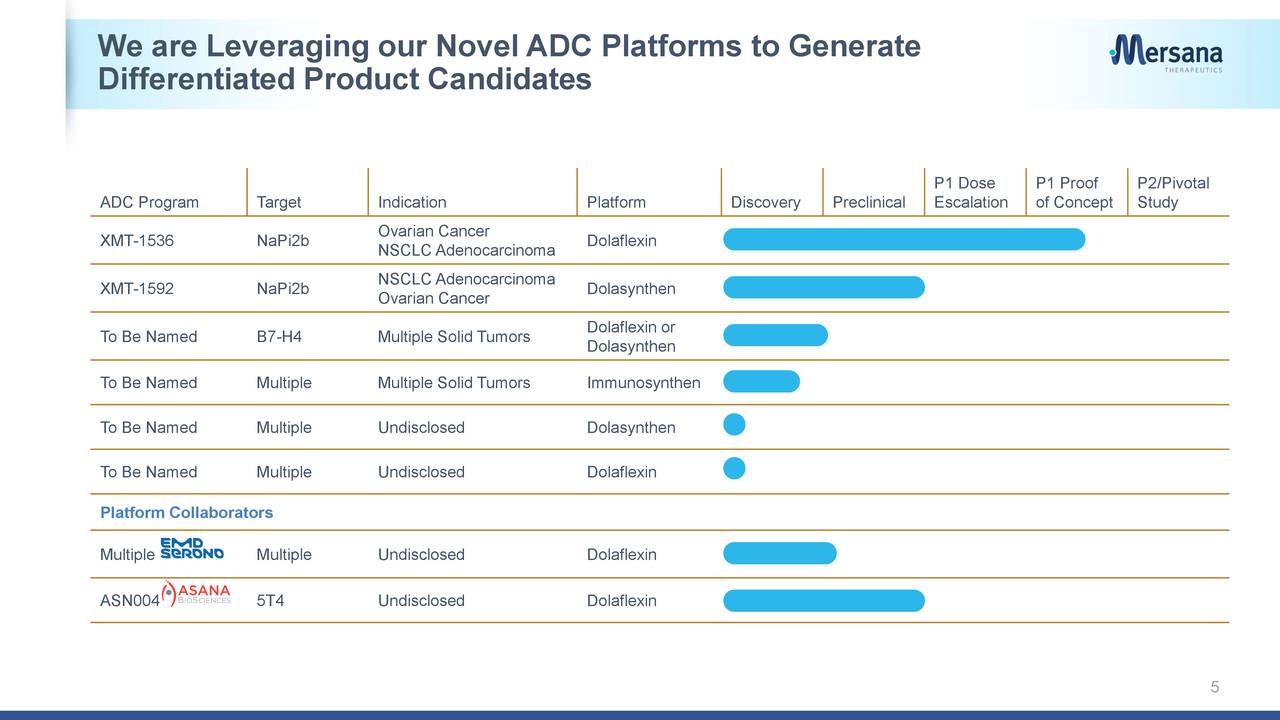 ADCs are an established approach to treating cancer – with seven treatments currently approved – but have face significant challenges. First, if the linker is not stable, and breaks down in the blood stream, it releases its payload systemically, instead of in the tumor, causing greater toxicity. The drug-to-antibody (DAR) ratio typically has been limited to three to four payload molecules per antibody due to aggregation, poor pharmacokinetics and loss of drug‑like properties of the ADC at levels above this threshold. Also, attempts above this threshold have met with safety and tolerability issues. The other major issue with ADCs involves the bystander effect, which occurs when a released payload is able to diffuse into and kill neighboring cells. This is great news when the nearby cells are tumor cells, but bad news when the ADCs are indiscriminately killing healthy cells. 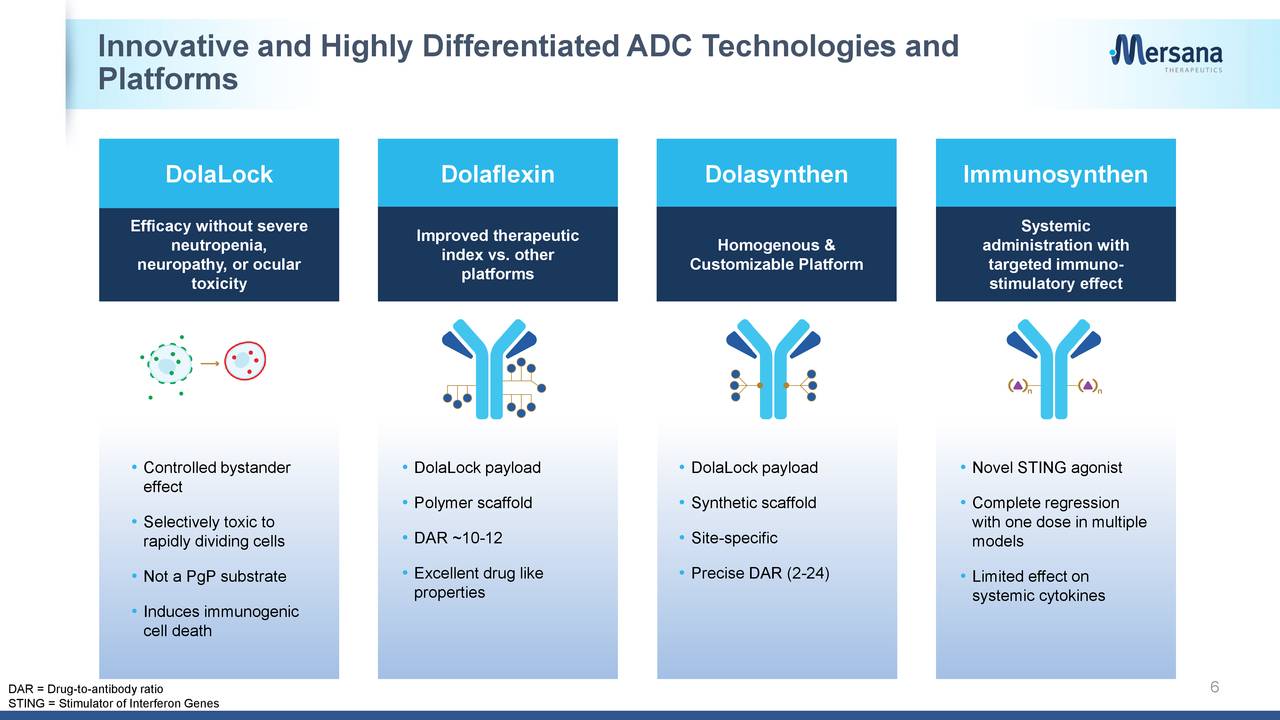 Mersana’s proprietary Dolaflexin platform aims to address these issues. Unlike traditional ADCs, where the payload is attached directly to the antibody via a linker, the company’s ADCs feature antibodies attached to multiple units of Dolaflexin, which each consist of proprietary Fleximer polymer scaffold conjugated to several proprietary auristatin payload molecules.

Because the Fleximer scaffold creates a highly hydrophilic microenvironment, it protects the linker and the payload, resulting in a highly-stable ADC during circulation. In primate studies, ADCs utilizing Dolaflexin have demonstrated less than 0.05% of free payload detected in circulation. Also owing to its highly hydrophilic microenvironment, the Fleximer shields the highly hydrophobic payload molecules and allows the ADC to achieve a DAR of 10 to 15, thus delivering more payload to the tumor cell while maintaining acceptable pharmacokinetics and drug‑like properties in animal models. Lastly, owing to a feature called DolaLock in its auristatin payload molecules, the company believes that it can control the bystander effect. The DolaLock payload is designed to lose the ability to diffuse into neighboring cells while maintaining its potency after they are metabolized in the tumor cell.

That’s the theory. In practice, Mersana’s first ADC candidate – the aforementioned XMT-1522 – flopped when a clinical hold was placed on its Phase 1 study after a patient death. Approximately three and a half months after the hold was lifted Mersana and then collaborative partner Takeda walked away from XMT-1522 in January 2019, citing the crowded HER2 (breast cancer) environment, although the risk-benefit profile of the asset was likely the reason Takeda dissolved its fruitless half-decade collaboration with Mersana.

XMT-1536. Forsaking XMT-1522 allowed the company to focus its efforts on XMT-1536, a Dolaflexin ADC that targets tumors likely to express NaPi2b, an antigen broadly presented in ovarian cancer (96% of cases) and non-small cell lung cancer (NSCLC) adenocarcinoma (87%) but not typically in healthy cells. XMT-1536 is currently undergoing assessment in Phase 1 dose escalation and proof-of-concept studies for said indications. The company is scheduled to present this interim data on a conference call at the upcoming American Society of Clinical Oncology 2020 virtual scientific program next week. 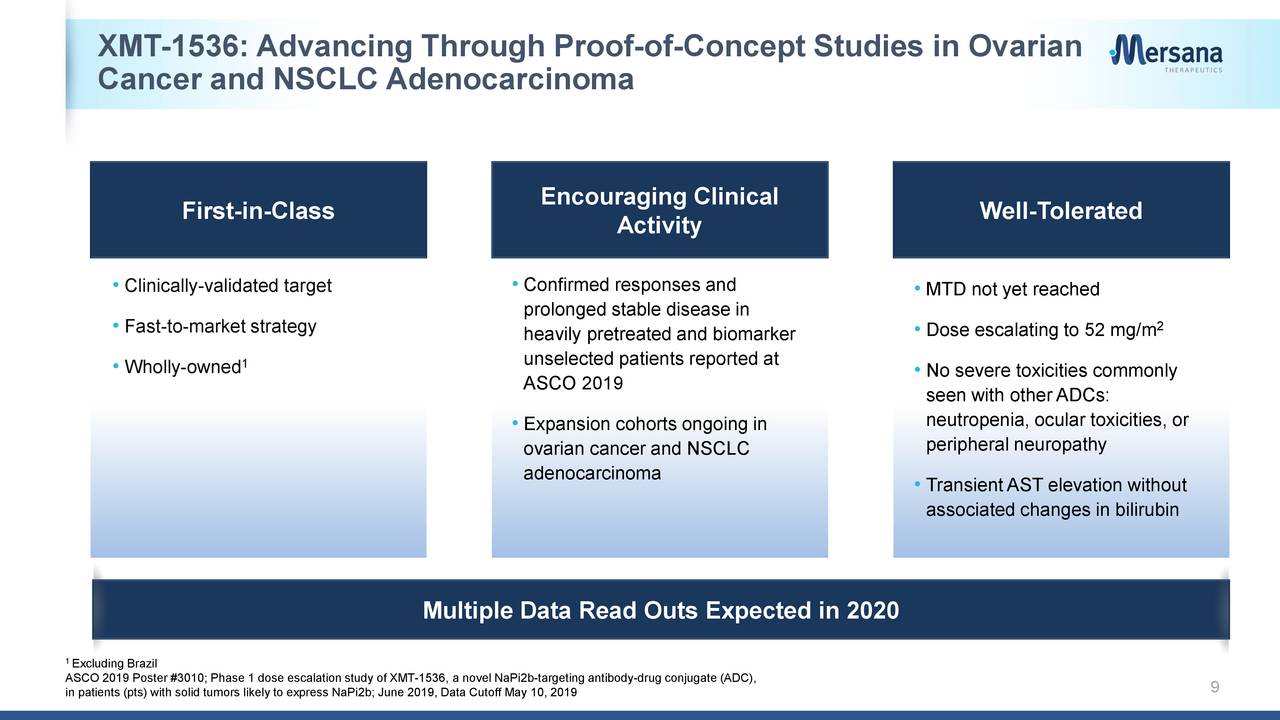 On March 30, 2020, the company readout interim data on 59 heavily pre-treated cancer patients – 37 ovarian, 11 NSCLC adenocarcinoma, 11 other – from these studies that seemed moderately encouraging. From a safety profile standpoint, there were no dose-limiting toxicities observed in the highest dose cohort (43 mg/m2) with transient liver issues (AST elevation) the most common Grade 3 adverse event. There were no cases of severe neutropenia, peripheral neuropathy, or ocular toxicity.

On the efficacy side of the ledger, the 43 mg/m2 XMT-1536 dosage demonstrated partial responses [PRS] in 2 of 7 patients and stable disease (SD) in four of seven patients for a disease control rate (DCR) of 86%. For the subset of patients who expressed high NaPi2b and received > 30mg/m2 dosage, five of 15 achieved PR and six of 15 achieved SD for a DCR of 73%. By contrast, no one in the nine-patient low NaPi2b expression subset achieved PR.

Although the patients were heavily pre-treated (median five treatments) with chemotherapy, PARP inhibitors, and/or immunotherapy with very poor prognoses, investors seemed unenthusiastic over the lack of any complete responses and the fact that only two of the PRs were ongoing. Mersana’s stock sold off ~15% over the following week – more on this story shortly.

XMT-1592. The company has advanced another drug development platform, known as Dolasynthen, which generates more customizable ADCs through a synthetic scaffold designed for optimal water solubility, charge balance, linker stability, site-specific conjugation, and DAR. Mersana believes it possesses all the attributes of the Dolaflexin platform but with superior physiochemical and pharmacokinetic properties. The company plans to file an IND and start dosing patients for the platform’s first asset, XMT-1592, sometime before the end of June. Like XMT-1536, XMT-1592 targets NaPi2b, but has been four times more efficacious treating NSCLC adenocarcinoma than its predecessor in the preclinic. The thinking here is that XMT-1536 will eventually target ovarian cancer while XMT-1592 will pursue the NSCLC indication.

Additionally, Mersana has a third platform, Immunosynthen, which is scheduled to deliver a stimulator of interferon genes (STING) agonist ADC candidate in the second half of this year.

Curiously, with the tepid reaction to the XMT-1536’s March 30 readout, Mersana was able to execute two ATM transactions on April 7, 2020. The company sold 8.9 million shares in the morning at $5.59 and 2.0 million shares in the afternoon at $7.74 to an investor group that included Avoro Capital Advisors LLC, Bain Capital Life Sciences, and Consonance Capital Investors. (Shares of MRSN have since rallied into the mid-$9 area.) Gross proceeds from the ATMs were ~$65 million, which nearly totaled the $67.7 million the company burned through in 2019. With $99.8 million in cash on the books at the close of 2019, $15 million available from a credit facility, and an uptick in clinical activity forthcoming, Mersana now has a cash runway into 2H21.

Street analysts are a generally positive on Mersana’s prospects, with four analyst firms reiterating Buy ratings over the past ten weeks including BTIG and Wedbush. Price targets proffered range from $12 to $14 a share.

David Mott, Mersana’s Chairman of the Board, also was a participant in the first ATM transaction on April 7, purchasing 538,599 shares at $5.59 per. Also of note: Bain Capital, which purchased over 3.4 million shares in the two ATMs, occupies a seat on Mersana’s board.

Although XMT-1536’s readout wasn’t off the charts from an efficacy perspective, it was conducted on patients with extremely poor prognoses, and it was very solid from a safety standpoint, emboldening investor perceptions regarding prospects for the likely more efficacious XMT-1592 and subsequent investigational agents.

More importantly, by focusing on NaPi2b expressive cancers, Mersana can carve out a niche in an extremely crowded ADC space that featured ~56 companies developing therapies in 2019. Ovarian cancer kills ~14,000 with ~24,000 new cases arising annually in the U.S. The standard of care is single-agent chemo with a 4%-12% overall response rate (ORR) and three to four months of progression free survival (PFS). The incidence of NSCLC is ~189,000 annually, resulting in ~132,000 deaths. The standard of care is checkpoint inhibitors and platinum-based chemo with a 14%-23% ORR and median PFS of three to four and a half months. Based on those depressing data sets, both indications have significant unmet needs, meaning a lower bar to clear from an efficacy perspective and possibly only one single arm registration study to gain approval. 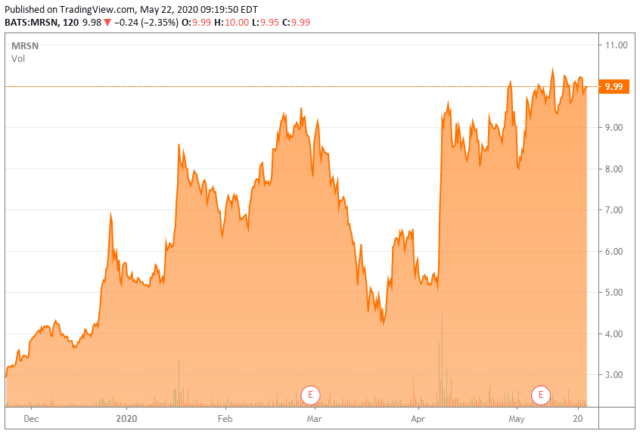 That said, the stock has had a massive run over the past six months. I hate chasing shares after such a big run. The company’s pipeline also is early stage. Therefore we are passing on any investment recommendation at this time.

Perfect is the enemy of good.”― Voltaire

Bret Jensen is the Founder of and authors articles for the Biotech Forum, Busted IPO Forum, and Insiders Forum

Author’s note: I present and update my best small-cap Busted IPO stock ideas only to subscribers of my exclusive marketplace, The Busted IPO Forum. Join our growing investment community by clicking on our logo below!