After pausing last week, the bounce back for midstream resumed in a big way this week. MLPs and the AMUS put up their biggest week of the year on the back of another big week of oil price gains and strength in the broader stock market. AMNA didn’t fare quite as well given underperformance of the big Canadian names. 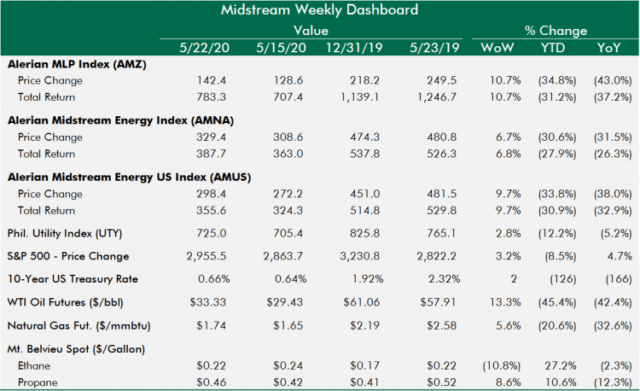 Even a bearish inventory report and some signs of production increases globally couldn’t stop oil prices from rallying further. With oil prices above $30/bbl and only down 45%, there seems to be some brewing enthusiasm that the shut-ins of production could be less than expected in 2020.

Although higher prices imply potentially higher drilling and completion activity in 2021 and potentially less volume declines, the current outlook depends on the return of demand and the continued support of global producers. Both demand and supply could offer negative surprises as we progress through the year, but for now, the good vibes continue. So, have a Coke and a smile and a Happy Memorial Day.

This week, I posted a virtual conversation with an ETF expert on the nuances of the Alerian MLP ETF (NYSEARCA:AMLP), the most popular MLP ETF. Aside from not offering very much exposure to natural gas pipeline assets (most of which reside within the large midstream corporations like WMB, KMI, ENB, TRP), the structure and tax peculiarities of MLPs create headwinds for investors to actually achieve the passive MLP exposure they are seeking when allocating to AMLP.

A Queen in Queens, Oil Exposure in MLPs

This week, I was thinking of the 1988 film Coming to America. In particular, I was thinking of the play on words joke that establishes the basic premise of the film: an African prince is seeking a Queen in New York, so naturally he decides to go to Queens. The silly idea that Queens would be the place to find a queen turns out to be prophetic by the end of the film. Akeem does in fact find his queen there.

Similarly, dedicated midstream investors try to discount the impact that oil prices have on MLPs, especially with the awareness that high oil prices don’t always lead to high returns on invested capital. The idea that you could find exposure to oil prices by buying MLPs seems counterintuitive, but in practice MLPs have been a great way to play the oil rebound in the last few months. Like Queens did turn out to be the ideal place for Akeem to find his Queen.

That film features a cameo by the two primary antagonists of the 1983 Eddie Murphy film Trading Places: Randolph and Mortimer Duke. At one point, Prince Akeem tosses out a wad of cash that a now homeless Randolph Duke picks up. He turns to his brother and says, “Mortimer, we’re back!”. Oil prices and midstream stocks are back to levels not seen since early March.

Best of the Best

This week was the 5th best ever for the Alerian MLP Index. About four weeks ago, we had the 10th best week and those who bought into that rip have been rewarded so far, as the AMZ is up 19.1% since. 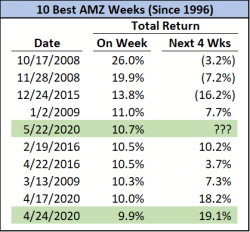 This week was the 7th best week for the broader midstream index (AMNA) and the 2nd best week all year. 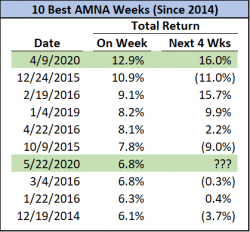 OMP finally reported results this week and the stock doubled, helped by better-than-expected results for itself and its sponsor Oasis, although sponsor uncertainty due to leverage remains an issue. The rest of the top 5 was also up 20%+. ENBL was the only negative MLP this week, down 2.7%. 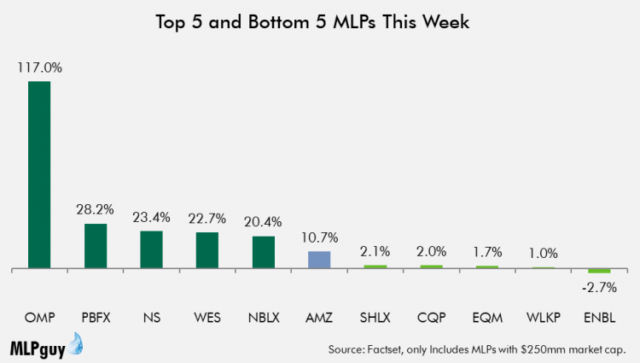 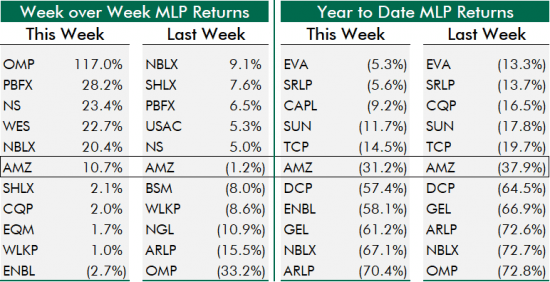 Smaller names in the midstream corporation group outperformed the big ones, leading the median return in this group to outperform all indexes this week. Permian players TRGP and PAGP were among the big winners. Natural gas pipeline players WMB, KMI, ETRN were the bottom 3 performers. 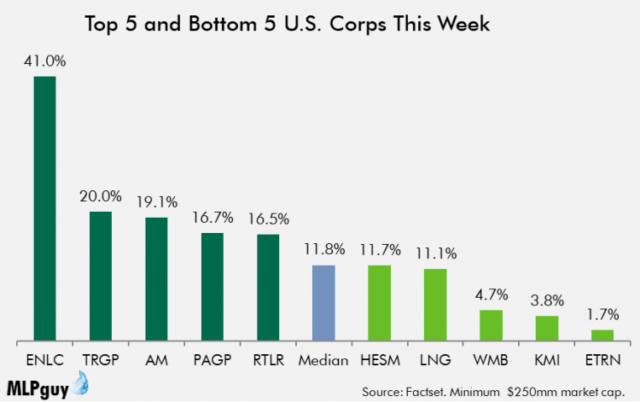 TRGP and RTLR repeated near the top of the group. On the YTD leaderboard, HESM took over the top spot in the group, pulling ahead of WMB. Cheniere (NYSEMKT:LNG) moved into third place, and AM joined the top 5, despite being down 35%+. Only 2 of the bottom 5 are down 50%+ this week vs. last week when all 5 were. 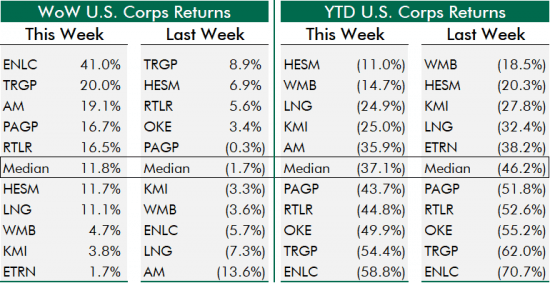 Smaller, higher-beta Canadian midstream stocks like PPL, KEY and IPL outperformed this week, while TRP and ENB underperformed. There was no news, but the rotation into more risk-on names as oil prices rip continues. 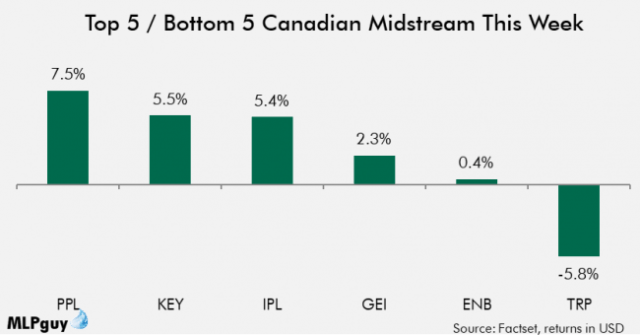 News of the (Midstream) World

It was a sleepy week with little news ahead of the holiday weekend. Still no big splashy M&A…yet.

Editor’s Note: The summary bullets for this article were chosen by Seeking Alpha editors.