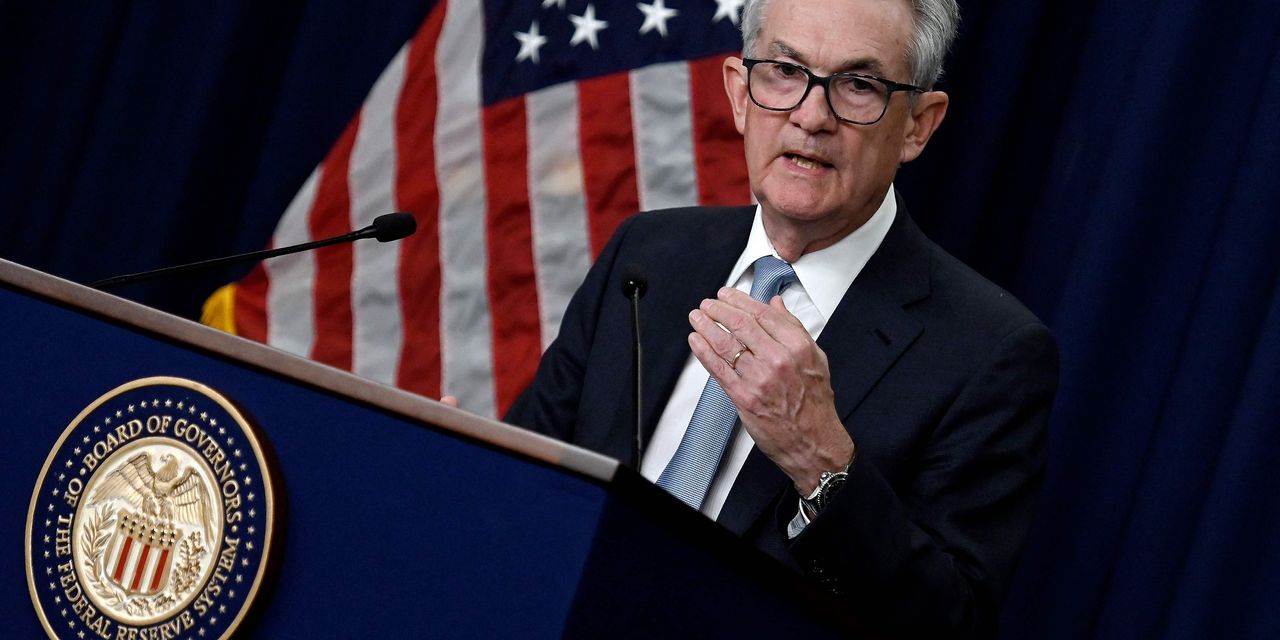 U.S. stocks traded lower on Thursday afternoon as Treasury yields and the dollar climbed further a day after the Federal Reserve delivered a third jumbo interest-rate hike and signaled more to come.

U.S. stocks fell again following Wednesday’s selloff after the Federal Reserve produced another 75 basis-point rate hike and reiterated its commitment to crush inflation, even if it means driving the U.S. economy into a recession.

“We will keep at it until the job is done,” Chair Jerome Powell said in a news conference on Wednesday after the Fed increased its policy interest rate for the third time in a row by 75 basis points to a range of 3% to 3.25%.

“I wish there were a painless way to do that. There isn’t,” he added. Investors were rattled by the Fed’s so-called dot plot, which tracks forecasts from individual policy makers. It produced a median forecast for a peak fed-funds rate of 4.6% in 2023 — above market expectations. Fed forecasts also implied that unemployment may rise significantly and the economy slow sharply.

Powell, in his news conference, “tried very hard to not give the market a silver lining,” said Christian Hoffmann, portfolio manager and managing director at
Thornburg Investment Management, in Santa Fe, New Mexico.

As stocks slumped, the CBOE Volatility Index
VIX,
,
a measure of expected S&P 500 volatility known as Wall Street’s “fear gauge,” was hovering around 28, near its highest level since the end of June and well above the long run average of 20 but still shy of levels that have typically signaled capitulation.

Evercore ISI Wednesday cuts its year-end S&P 500 target to 3,975 from 4,200 and expects a “full retest” of the June low in the weeks ahead to reflect a rising probability of a recession.

The latest stock market relapse leaves the benchmark S&P 500 index precariously placed, having decisively broken below perceived support at 3,900 and is now within sight of the lows for the year of 3,667 in June, analysts observed.

“After several days of chop between the 3,850 and 3,900, the [S&P 500] got a final rejection of 3,900 today before closing under 3,800…We believe the pain trade is lower. Given today’s [Wednesday’s] downside reversal and a continued lack of any capitulatory signals, we think the path to the June lows might be faster than many anticipate,” wrote Jonathan Krinsky, chief market technician at BTIG.

However, Krinsky stressed that though the market was continuing to face seasonal headwinds, such conditions should improve by mid-October.

“We think we test or break the June lows before then, which should set up a better entry point for a year-end rally,” he concluded.

See also: Fed will tolerate a recession, and 5 other things we learned from Powell

U.S. investors digested a couple of economic data reports early Thursday, including the latest read on jobless claims, which showed that new applications for unemployment benefits edged higher to 213,000 last week. However, the U.S. labor market remains robust. Data showed the current-account deficit for the second quarter shrunk compared with the same period last year, likely due to the impact of the stronger dollar.

Outside the U.S., the trend for tighter monetary policy among developed nations continued apace on Thursday — with one notable exception. Norway’s central bank raised borrowing costs by 50 basis points to 2.25% and the Swiss National Bank hiked by 75 basis points to 0.5%. The Bank of England also hiked rates by half a percentage point.

But the Bank of Japan left policy unchanged, leaving overnight rates at minus 0.1% as it maintained that inflation of 2.8% mainly reflects surging commodity prices.

The BoJ promptly intervened in the market, pushing the dollar
USDJPY,

lower, a trend also reflected in the euro and sterling, and a move which helped sentiment in U.S. equity futures, where the greenback’s recent surge to a more than 20-year high has proved a headwind of late. The ICE U.S. Dollar Index
DXY,
,
a gauge of the dollar’s strength against a basket of rivals, climbed above 111 for the first time since 2002.

Bond yields surged to multi-year high with the yield on the 2-year Treasury
TMUBMUSD02Y,

moving further above its highest level since 2007. The yield on the 10-year Treasury
TMUBMUSD10Y,

See: A punishing selloff in short-term debt is pushing one rate near the ‘magic’ level that ‘frightens’ markets

— Jamie Chisholm contributed to this article.