The rapid growth of the U.S. shale industry is at the heart of a Russia-versus-Saudi Arabia crude-oil price war that threatens to upend a global economy already under threat from the spread of the coronavirus, experts said Monday.

“Russia has made no secret of the fact that it is concerned about the growth of the U.S. shale industry and of its view that repeated output cuts by OPEC were effectively handing market share to U.S. producers,” said Caroline Bain, chief commodities economist at Capital Economics, in a Monday note.

Russia’s rejection last week of a Saudi push for additional production cuts prompted Saudi Arabia over the weekend to slash prices on crude exports in a move analysts said was aimed at taking market share from Russia. But it was Russia’s longstanding frustration with rapidly growing U.S. shale industry that prompted Moscow to resist the push for additional production curbs.

Saudi Arabia over the weekend slashed prices on oil exports, a move that traders took as a sign that the Riyadh was ready to take on Russia in a global price war that would flood the world with crude at the same time demand is curtailed by the COVID-19 outbreak.

The plunge in oil prices combined with coronavirus jitters sent shock waves through global financial markets and prompted a stock-market plunge that saw the Dow Jones Industrial Average DJIA, +0.34% fall more than 2,000 points, or 7.8%, while the S&P 500 SPX, +0.51% dropped 7.6%.

Shares of banks that are the biggest lenders to the energy sector tumbled Monday.

U.S. oil output has grown rapidly since 2009 (see chart below), driven by increased output from shale, which hit 7.7 million barrels a day in 2019, according to the U.S. Energy Information Administration. Shale, or tight-oil, production accounted for 63% of U.S. output last year. 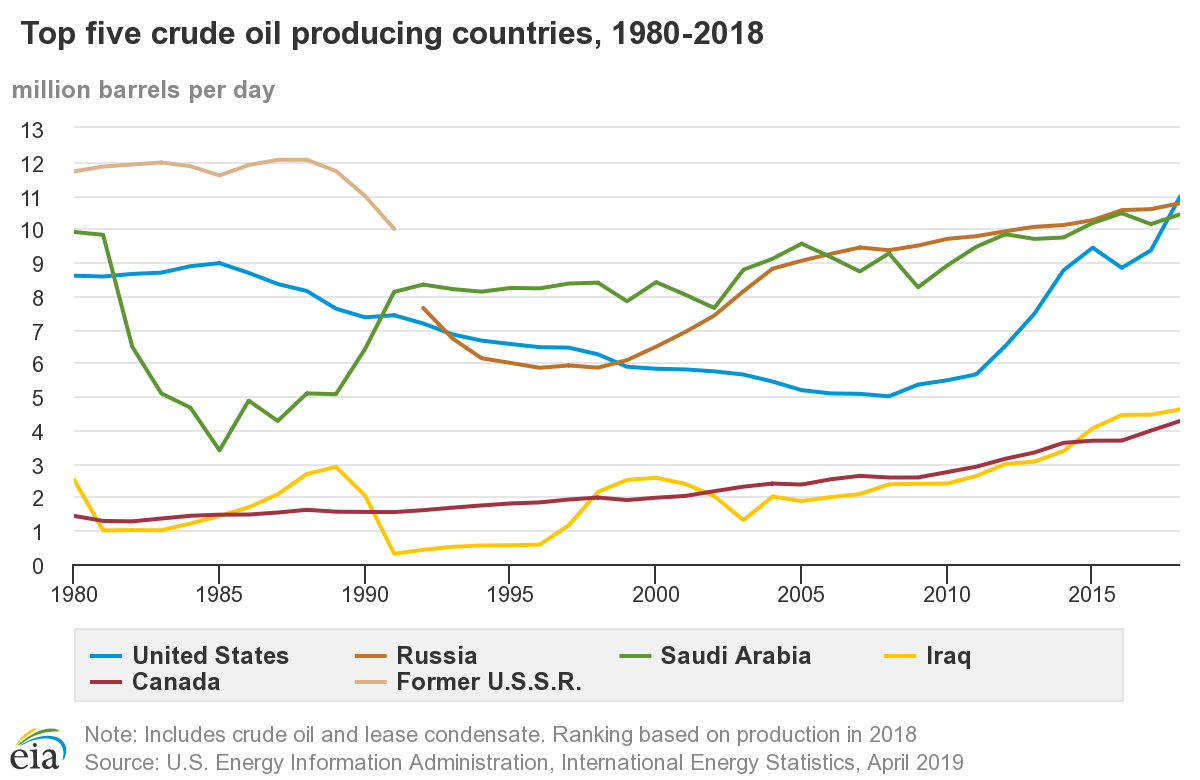 Russia is unlikely to blink, said Matthew Schmidt, associate professor of national security and political science at the University of New Haven, in a phone interview. Moscow appears intent on attempting to push out North American shale producers who can’t profitably pump at current prices, he said.

But the move is a “real risk for Russia because they could push prices down and not have them come back up for a variety of reasons,” he said. Moscow is betting it can wait out its competitors.

Bain said that while the Saudis have been more discreet when it comes to frustration over shale producers, the moves by both Riyadh and Moscow are driven in part by global market-share considerations.

“Many commentators have dubbed this the start of a price war between Saudi Arabia and Russia. It is true that the world’s second and third largest crude producers will be competing on price. But we think that it is actually more of a war for market share and that it is not just between Russia and Saudi Arabia,” she said.

The price war does promise to be painful for both Saudi Arabia and Russia, analysts said.

Saudi Arabia needs Brent crude to trade around $80 a barrel to maintain a balanced budget, but has room to run deficits given its ability to borrow in public debt markets. Russia needs a price of only $45 a barrel to balance its budget, though prices are now well below that level, noted Ryan Fitzmaurice commodities strategist at Rabobank.

But it’s the U.S. shale producers, who were already on the ropes financially, who face the biggest challenge, he said.

Shares of U.S. shale producers fell sharply Monday, while corporate bonds for the group are trading at a sharp discount to par due to the industry’s uncertain outlook and the increased risk of bankruptcies, he noted.

Goldman Sachs analysts on Sunday said a price war could push crude prices toward $20 a barrel, especially as the economic slowdown caused by the coronavirus outbreak slows global demand. Those price levels “will start creating acute financial stress and declining production from shale as well as other high-cost producers,” Goldman warned.

Fitzmaurice said Russia’s salvo “is likely to lead to significant downward revisions to U.S. production growth in 2020 and 2021 as producers go into ‘maintenance’ mode and further reduce capital expenditures and drilling budgets in an effort to survive a period of sustained oil prices,” he said.