Home
Stocks
Market Extra: What’s next for the 10-year Treasury? Wall Street has no more idea than you do
Prev Article Next Article
This post was originally published on this site

Wall Street forecasters are scrapping their U.S. Treasury yield forecasts once again in the face of the uncertainty about the economic impact of the COVID-19 epidemic emanating from China and the resulting slump in global stockmarkets this week.

The global slump in equities markets this week has pushed investors into Treasury notes and bonds, pushing yields below previous records, key charting levels, and end-of-year targets. With so many unanswered questions around the coronavirus impact on the global economy, analysts say there was little point in attempting to guess when the bond rally would end.

“It’s a fear trade. I don’t think there’s a specific level we go to. If things keep escalating, safe havens will be bid,” Justin Lederer, an interest-rate trader at Cantor Fitzgerald, told MarketWatch.

“We can’t rule out 1% just because there’s so much uncertainty,” said Kathy Jones, chief fixed-income strategist at Schwab Center for Financial Research, in an interview. 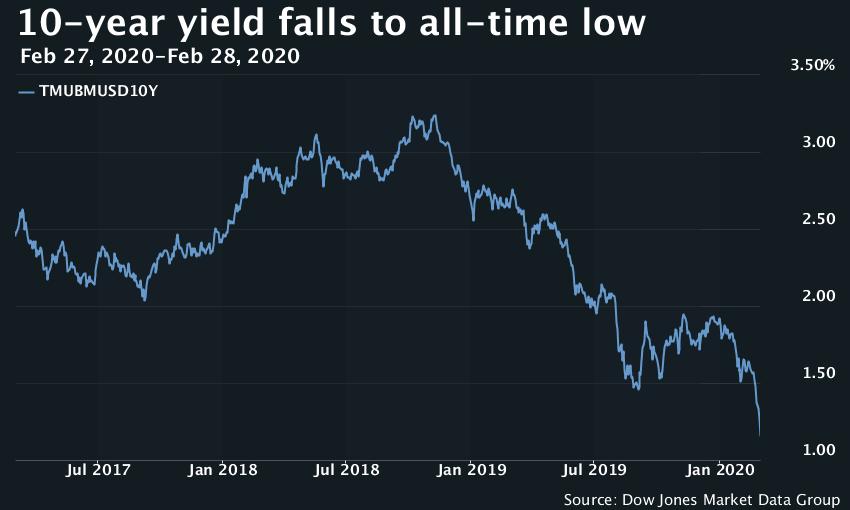 Before the year began, most investors anticipated flat to higher yields in 2020 resulting from stabilizing global economic growth. With the signing of a phase one U.S.-China trade deal and U.K.’s withdrawal from the European Union in January, two sources of uncertainty that had acted to restrain the rally in stocks were cleared away, opening the path for an industrial recovery across the world.

The consensus projection from the Wall Street Journal’s survey of 60 economists in January was for the 10-year note yield to end at 1.98% in December 2020, with the majority of estimates clustered between a range of 1.50% to 2.25%.

See: Here’s where the 10-year Treasury yield is headed in 2020 as Brexit and U.S. – China trade headwinds clear away

But the coronavirus epidemic and its potential for disrupting international trade and travel swiftly put an end to such hopes as investors were confronted with the possibility of supply-chain disruptions in the second largest economy of the world, and its neighboring countries. Reports of cases of the COVID-19 disease in Europe, South America and the U.S. have also raised the potential for a global pandemic, an eventuality that could throw a wrench into global economic growth.

“It’s so difficult to ever forecast a year-end yield at the beginning of the year. You never know what is going to come up,” Michael Lorizio, senior fixed-income trader for Manulife Investment Management, told MarketWatch.

Those who dived into long-term government paper have been rewarded this year, once again affirming that their shrinking yields have not dented the ability of Treasurys to act as ballast against a broader selloff across financial markets. The U.S. dollar’s reserve-currency status and the immense size and liquidity of the U.S. bond market have made it the haven of choice for panicked investors.

“The depth and breadth of the Treasurys market is unparalleled,” said Lorizio.

Even as the rally in other haven assets like gold have begun to lose momentum, Treasurys have managed to extend their gains amid expectations for rate cuts by the Federal Reserve.

While recently cleaning her home, Jones said she found an old pile of reports collected since the start of her career, containing confident declarations from analysts and investors that the demise of the U.S. bond bull market was nigh, only to be proven wrong time and time again.

“Those calls have been going on for 30 years,” Jones she said.

Read: The bond market will be slapped by coronavirus for months, this analysis finds

Yet even with the uncertainty about the impact of the coronavirus epidemic, a few analysts say Treasury yields don’t make much sense at current levels as there is not much evidence that the U.S. economy is at risk of tipping into a recession soon. Once the panic over the epidemic has subsided, investors may balk against the scant yields offered by long-term government bonds, said market participants.

“Treasury yields have gone onto historical lows. They are very susceptible to a potential reversal, especially in a situation like now when momentum takes over,” Lindsay Bernum, global macro analyst at Smith Capital Investors, said in an interview, who warned that previous snapbacks have easily exceeded more than a 100 basis points.

And there’s been some emerging signs that demand could be sagging at least when it comes to new issuance, with long-term investors appear unwilling to lock in yields at current levels. The U.S. Treasury Department conducted three debt auctions this week, and all experienced a “tail,” an indication of tepid demand.

But with yields continuing to trade lower in secondary markets, even bearish traders don’t want to bet against the momentum of the bond-market rally.

“Personally, I think the markets are a better sell than buy. We’re reprice substantially over the coming months, we just don’t know when that will happen,” Tom di Galoma, managing director of Treasurys trading at Seaport Global Securities, told MarketWatch.