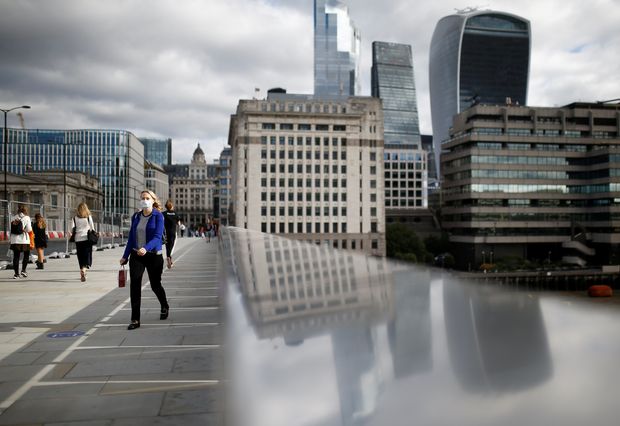 The financial district is seen behind a woman wearing a protective face mask as she walks over London Bridge, amid the COVID-19 outbreak in London, England, on August 26, 2020.

London stocks were headed for a third straight day of losses on Wednesday, as shares of drugmakers eased and investors took to the sidelines ahead of a speech by Federal Reserve Chairman Jerome Powell.

A resumption of China-U.S. trade talks triggered a buying mood on Wall Street on Tuesday, with the S&P 500 and Nasdaq Composite marking fresh record highs, though the Dow industrials finished lower. And stock futures indicated a mixed start for Wednesday.

Investors worldwide are waiting for a much anticipated speech from Fed Chairman Powell, who will deliver remarks to the annual Jackson Hole, Wyo., economic symposium held by the Kansas City Fed.

“Expectations are running high: Powell is set to use this to deliver a shift in the way the Fed approaches inflation, sending a dovish message to the market that the central bank is in this for as long as it takes,” said Neil Wilson, chief market analyst at Markets.com, in a note to clients.

Elsewhere, the U.K. and Japan are expected to agree on a free-trade pact, possibly as soon as next month, the Nikkei Asian Daily reported. Last week’s European Union-U.K. talks over a future trade treaty ended without a deal, after Brussels rejected a U.K. request to grant its truckers wide-ranging access to Europe,

Read: Royal Navy could be deployed to prevent violent clashes between British and European fishing boats in emergency U.K. scenario

As for stocks on the move, shares of drugmakers AstraZeneca AZN, -0.31% and GlaxoSmithKline GSK, -0.46% were down modestly.

Shares of drinks maker Diageo DGE, -1.17% dropped 1%. In a preview of rival Pernod Ricard’s RI, -0.10% results due on September 2, analysts at Goldman Sachs said while a cautious outlook is expected from that drinks maker, Diageo may be in a worse position.

“Pernod’s momentum has been stronger than Diageo into the COVID-19 crisis and unlike Diageo, Pernod’s exposure to Africa, Latam and U.K./Ireland on-trade is more limited, while it has a greater exposure to China,” analysts Olivier Nicolaï and Richard Felton told clients in a note.

Shares of BP BP, -0.92% dropped 0.7%, as oil companies remained in focus with a major hurricane bearing down on the U.S. Gulf Coast. A pair of storms has forced the shutdown of more than 80% of offshore crude-oil production in the Gulf of Mexico and triggered refinery cuts. U.S. crude price CL00, -0.41% eased in early trading.

Hurricane Laura was expected to strengthen into a Category 4 hurricane, and produce a “life-threatening” storm surge, the National Hurricane Center said. It is forecast to produce extreme winds and flash floods over eastern Texas and Louisiana later on Wednesday.

Also dragging the FTSE 100 south were shares of heavily-weighted HSBC Holdings HSBA, -1.09%, down 1%.