The German residential real estate sector remains in motion. LEG Immobilien AG (OTCPK:LEGIF) announced that it is in talks with rival TAG Immobilien AG (OTC:TAGOF) regarding a potential merger. LEG plans to propose an all stock transaction in order to combine the companies’ businesses. In this article I will explain why I believe that a merger would make sense and what it would mean for shareholders of both companies. 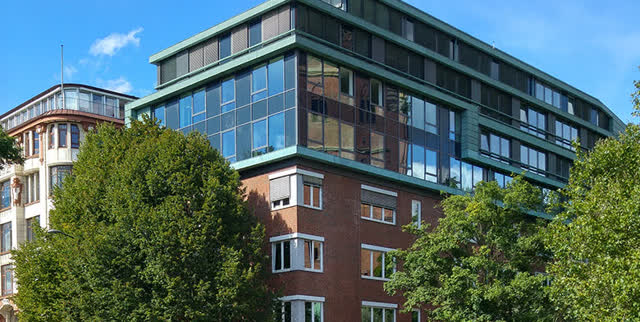 LEG’s portfolio is predominantly located in Western Germany. TAG on the other hand is geographically focused on Northern and Eastern Germany. TAG also owns some units in Poland. That means, of course, that some synergies are limited. For example service offices could hardly be unified. On the other hand, however, it also means that the companies could diversify their portfolios considerably. That would reduce the risk arising from too much geographical focus. Furthermore, the sheer gain in size would also increase the combined company’s financial firepower significantly. The German real estate market is consolidating at the moment. For example, Adler Real Estate AG (OTC:ADREF) recently merged with ADO Properties SA (OTC:ADPPF). In order to be able to play an active role, scale would certainly be beneficial.

Also, due to the complementary structure of the respective portfolios, antitrust concerns are not to be expected. Notably, the combined company would still be considerably smaller in size than the biggest player on the German residential rental market, Vonovia SE (OTCPK:VNNVF;OTCPK:VONOY). And as I have explained before, I do not believe that antitrust concerns would pose an obstacle if that company would merge with the current number two, Deutsche Wohnen SE (OTCPK:DWHHF;OTCPK:DTCWY). Consequently, I believe that a maiore ad minus a merger of LEG and TAG would be even less problematic in that regard.

Both companies have a number of major shareholders in common. Unsurprisingly, BlackRock Inc. (BLK) which owns 7.5 percent of LEG and 6.2 percent of TAG is one of them. Massachusetts Financial Services Co. (“MFS”) holds even larger percentages in both companies. MFS has a 10.5 percent stake in LEG and a 9.9 percent stake in TAG, making it the largest shareholder of both. Another large shareholder is Flossbach von Storch (5.2 percent ownership interest in TAG; 3 percent in LEG). Naturally, that would make it somewhat easier to get approval for a merger, as long as management is able to get those investors on its side.

The similarities in shareholder structure lead me to another assumption as well. It is rather unlikely that the valuations would be tilted too far to either company’s exclusive benefit. The aforementioned investors would not have an interest in that. After all, it would be somewhat of a zero sum game for them anyway. Achieving a win-win situation would thus be paramount. In order to do so, valuation is key.

Based on the market capitalization at the time of writing (May 24th), TAG is about 42 percent as valuable as LEG. Notably, that already includes a jump in price following the news of a potential merger. LEG gained value too, but its gains were relatively smaller. Currently, LEG owns about 136,000 units. TAG owns just shy of 85,000 units with a similar average unit size. While LEG’s portfolio is about 60 percent larger in terms of space owned, it generates more than twice the FFO (Q1: LEG €94 million; TAG €42 million) and around twice the EBITDA (Q1: LEG €109.8 million; TAG: 54.9 million) that TAG generates. LEG is also growing faster (TAG Q1 FFO +6.33 percent YoY/EBITDA +4.17 percent YoY; LEG Q1 FFO +10.7 percent YoY/EBITDA +5.48 percent YoY). At the same time, LEG’s loan-to-value ratio is somewhat lower at 38 percent (TAG: 44.6 percent).

Valuing TAG at 42 percent of LEG would probably make sense. However, since LEG is taking the initiative, a certain premium might be necessary. It would be an all stock transaction so the balance sheet would not suffer too much. Therefore, I believe that anything below 50 percent (in other words: TAG shareholders would own up to a third of the combined company) would be economically justifiable. That would equal upside potential of up to 19 percent for TAG shareholders. However, it is more realistic in my view to expect a valuation closer to 45 percent (= about 7 percent upside potential). After all, shareholders of TAG would already be set to profit from the improved and diversified portfolio and balance sheet at the current valuation.

All in all, I believe that a merger would be a win-win situation for both LEG’s and TAG’s shareholders. The combined portfolio would be more diversified and the financial firepower would be improved significantly. There would also be the potential for – albeit limited – synergies, particularly in terms of administrative expenses and overhead cost. Hence, existing investors in either of the companies would be well advised to keep their shares, I believe.

All those, however, who would be interested in playing a potential merger but are not yet invested should probably go for the stock of TAG. Post transaction they would own a stake in the same company either way, yet if the exchange ratio was (slightly) tilted towards one of the parties, it would most likely be TAG. At least I doubt, that LEG could get away with an offer below the current share price. And, as I explained, I believe that the current share price represents more or less a fair relative value for the share. So any premium on top would be essentially “an extra” while no premium would still not be a loss.

Disclosure: I/we have no positions in any stocks mentioned, but may initiate a long position in TAGOF over the next 72 hours. I wrote this article myself, and it expresses my own opinions. I am not receiving compensation for it (other than from Seeking Alpha). I have no business relationship with any company whose stock is mentioned in this article.

Additional disclosure: Disclaimer: All research contained in this article was done with the utmost care. However, I cannot guarantee accuracy. Every reader is advised to conduct his or her own due diligence and research.