Home
Stocks
Jack In The Box: Not Cheap Now
Prev Article Next Article
This post was originally published on this site

Since the middle of March, Jack In The Box (JACK) has bounced off strongly, from $18.60 per share to $65.40 per share, delivering shareholders return of more than 250%. The market sentiment is good for Jack. However, because of the declining same-store sales, and high valuation, we do not think Jack is cheap anymore.

Like any other restaurant in the U.S., Jack’s operating performance has been declining due to COVID-19’s negative impact. Before COVID-19 lockdown, Jack’s same-store sales had increased by 5.2% in the first seven weeks ended March 8. When everybody was staying at home, its same-store sales decreased by as much as 17% in the next five weeks. As a result, the second-quarter same-store sales were down by 4.2%.

In year-over-year terms, Jack’s total sales rose around 0.2%, driven mainly by 14% growth in franchise rental revenue. In contrast, other revenue streams, including company restaurant sales, franchise royalties and franchise contributions for advertising and other services declined in the recent second quarter. Its net earnings dropped by more than 54% to only $11.46 million, or $0.50 per share. We would expect Jack’s operating performance would continue to be negatively affected because of the U.S. lockdown and low level of economic activity. The fast-food chain should keep focusing on growing drive-thru, third party delivery, and carry-out, as most of its restaurants’ dining rooms are currently closed.

High leverage but spreading out in many years

What worries investors is the company’s high leverage level. As of April 2020, it had more than $132 million in cash, but the total debt was 10x higher, at more than $1.38 billion. However, the debt maturities spread out many years. From now until 2022, the average annual debt principals, which would have to be repaid was roughly $800,000. The most significant amount of debt, around $575.9 million, will mature in 2023 and an additional $725 million after 2024.

Jack is not cheap now

Jack In The Box is not cheap compared to its historical valuation. In the past ten years, its earnings multiples have fluctuated in the wide range between 7x to 47x. At the current moment, its trailing P/E is as high as nearly 30x. 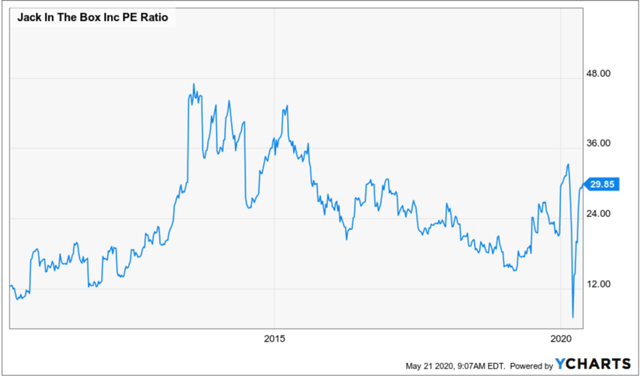 In the past five years, its average price-to-earnings ratio is also quite high, at around 24x. As we expect, Jack could generate $1.76 in earnings per share, and a 24x earnings multiple could value Jack at around $42.24 per share.

We expect that Jack would experience lower operating results in the next several quarters, when the business is absorbed with the full negative impact of the COVID-19 lockdown. We do not know when the virus situation will end. Thus, we could not time the turnaround of Jack’s operating performance. We do not think Jack is cheap at the moment, given no margin of safety for investors at the current price.