After rewarding its shareholders with a steadily growing dividend for well over the last decade, Imperial Brands (OTCQX:IMBBY) recently took the difficult but necessary decision to reduce it by one-third. I have previously warned that 2020 would be a make or break year for its dividend, and unfortunately, it appears that it was the latter. This article provides an updated analysis that focuses on whether it will be able to sufficiently deleverage after taking this painful decision and, by extension, whether shareholders should expect further dividend reductions.

When assessing dividend coverage, I prefer to forgo using earnings per share and use free cash flow instead, since dividends are paid from cash and not from “earnings”. The graph included below summarizes its cash flows from the last quarter and previous three years. 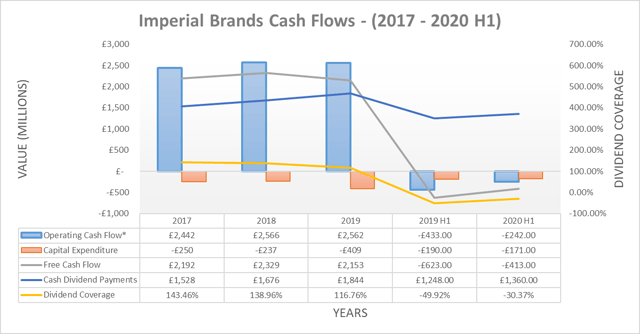 Whilst the company has always been able to cover its dividend payments with free cash flow during 2017-2019, it still has been deteriorating from 143.46% in 2017 to only 116.76% in 2018. Although this was largely due to the previous large annual increases of approximately 10%. Naturally by reducing its dividend by one-third, the dividend coverage moving forward will be considerably higher, even with its earnings decreasing modestly. The question at the moment for its dividend sustainability going forward in the short- to medium-term is whether this will provide it with sufficient ability to deleverage.

Seeing as its dividend payments amounted to £1.844b during 2019, saving one-third of these will provide an additional £615m of cash for reducing the net debt and thus leverage. Seeing as its earnings are coming under pressure, with adjusted operating profit decreasing 9.30% year on year in the first half of the 2020 fiscal year, it will be subsequently assumed that this £615m is the only cash available for deleveraging. This provides a margin of safety, which is important since the company is operating in an industry that is facing a secular decline and had low dividend coverage before this reduction, both of which are further hampered by its new generation products performing poorly.

Whilst the company can likely begin lowering its net debt and thus leverage, the extent that this is required will depend upon its current financial position. The three graphs included below summarize the company’s financial position from the last quarter and previous three years. 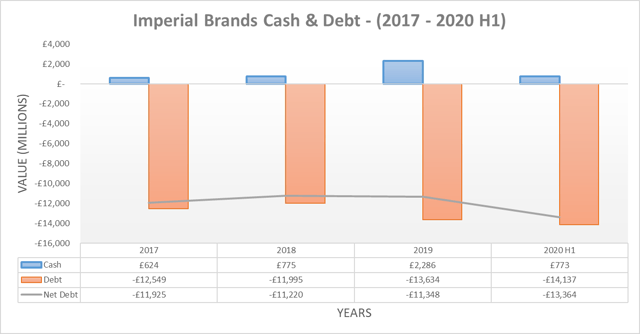 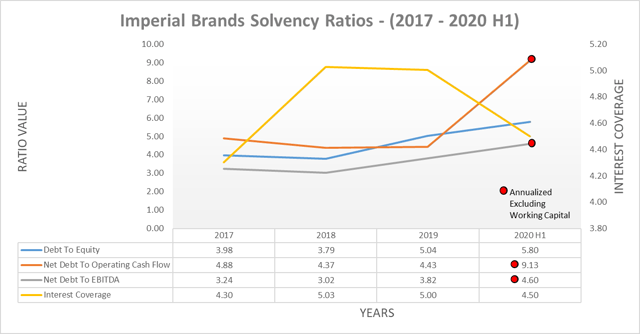 After reviewing these financial metrics, it easily becomes apparent why Imperial Brands reduced its dividend to prioritize deleveraging, with all of these indicating that the leverage is reasonably high even for a company with economically resilient earnings. Seeing as its earnings are coming under pressure and thus are not necessarily resilient at the moment, all of these have deteriorated during the first quarter of 2020 and thus this further exacerbates the company’s requirement to deleverage.

Even if earnings were to stabilize and never decrease again, which currently appears to be a bullish assumption, Imperial will need to reduce net debt by at least one-third to materially decrease the leverage. Since net debt currently stands at a formidable £13.364b, this would entail reducing it by £4.455b, which would still take over seven years. This indicates that the company faces a long road ahead to deleveraging and thus the dividend remains at risk of seeing further reductions, especially if earnings soften any more. 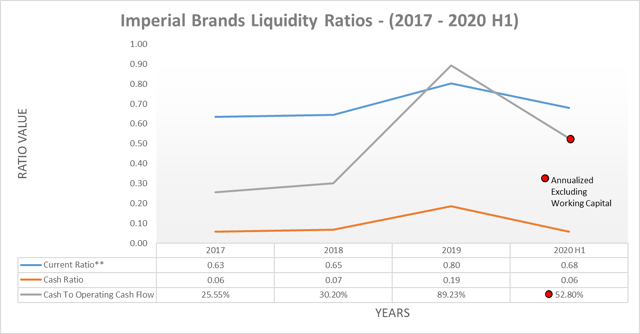 Even more concerning than the leverage increasing during the first quarter of 2020 is that the company’s liquidity also deteriorated, with the current and cash ratios of 0.68 and 0.06 being less than ideal but not yet quite crisis level. Since Imperial is still a large company and central bank policy is likely to continue being very accommodative for the foreseeable future, this does not appear to be a significant problem at the moment, but should still be monitored in the future.

The best scenario appears to be one whereby the company undertakes this slow deleveraging process across the better part of the next decade. Whilst the new dividend yield of almost 9% can appear attractive, the risk that it sees further reductions is too significant and thus I believe that maintaining my neutral rating is appropriate.

Notes: Unless specified otherwise, all figures in this article were taken from Imperial Brands’ Earnings Reports, all calculated figures were performed by the author.