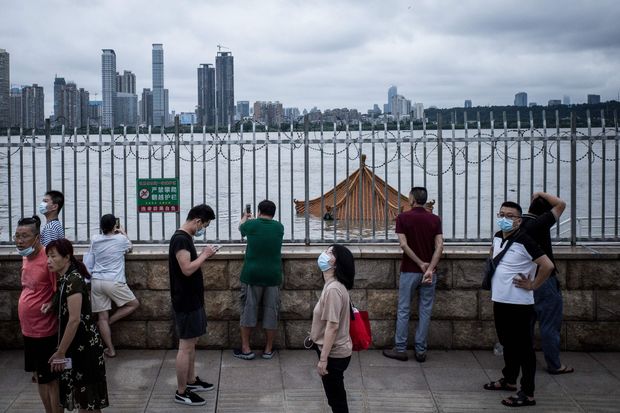 This photo taken on July 12, 2020 shows residents standing before an inundated pavilion in the swollen Yangtze River in Wuhan in China’s central Hubei province. – Various parts of China have been hit by continuous downpours since June, with the damage adding pressure to a domestic economy already hit by the coronavirus pandemic. (Photo by STR / AFP) / China OUT (Photo by STR/AFP via Getty Images)

Providing some home for global economies, China on Thursday reported better-than-expected growth figures as the country fought back from a COVID-19 induced rout.

But picking apart the data, analysts warned that there are struggles beneath the surface, and the likelihood of a tougher second half.

First, the details: Second-quarter GDP expanded 3.2% from a year ago, beating an analyst consensus estimate of 2%, and surging back from a 6.8% rout in the first quarter. Compared to the first quarter, growth was up 11.5%, the National Bureau of Statistics said, while the first half saw a drop of 1.6%.

According to a breakdown by Goldman Sachs analysts, industrial production rose 4.8% in June from a year ago, beating the bank’s own forecast of 5.2%, while retail sales fell 1.8%, falling short of a consensus estimate of growth of 0.5% and fixed asset investment fell 3.1%, slightly beating forecasts for a drop of 3.3%.

Goldman said the overall beat on the data was down to four factors: the economy saw “much less drag” from the virus, which the government more or less has had under control since the early-year outbreak; the policy stance was supportive before June; exports growth was better than expected, and agriculture and financial sectors saw strong growth.

But Yu Song and a team of Goldman analysts said the downside to this strong data is that it will “reduce pressures for a more dovish policy.”

“We see increased downside risks to our 2H forecast as policy started to turn less supportive,” said the Goldman team. “Non-medical exports, medium-low end consumption, core CPI inflation are some examples of areas of the economy which remain weak.”

While policy makers are “aware of the dangers of over tightening,” policy is also swayed more by headline numbers, said Song and the team.

Stephen Innes, chief global markets strategist at AxiCorp, said while China’s headline number on growth is “unambiguously positive” for risk sentiment, it’s “what’s under the hood that matters most.”

He said the data shows how a government can “normalize the supply side of the economy” with industrial production growth, rather than demand with retail sales dropping after the COVID-19 shock.

“No matter how much stimulus and fiscal sugar you try to entice consumers with, they will not leave their apartment and go on a spending spree until they feel confident the landscape is virus-free,” said Innes.

China’s CSI 300 index 000300, -4.36% was down 2.7% in late afternoon trade, which analysts said partly reflected that mixed Chinese data, but also tensions between that country and the U.S. The New York Times reported Congress was considering a sweeping move to ban Chinese Communist Party members.

Vaccine-driven optimism drove a rally for global equities on Wednesday, with Dow futures YM00, -0.42% down 100 points and European stock futures also pointing to a weaker session.