Small and medium businesses are set to become the next target of the Federal Reserves measures to open up the flow of credit throughout an economy that has threatened to freeze up over the coronavirus pandemic which has shutdown businesses across the country.

The Fed’s lending facility will use the banking system, such as commercial lenders and credit unions, as a conduit to funnel short-term financing to businesses so that they can make payroll and stay afloat in the coming months when sales are reduced to a trickle, analysts say.

“This is going to save Main Street,” said Joseph Brusuelas, chief economist at consultancy RSM.

See: Fed officials sound upbeat on outlook but admit to some uncertainty

“Given the gravity of the crisis, my sense is that medium-sized firms are going to gravitate towards the program. Once it gets going, it will ramp up quickly,” he said, pointing to the historic surge in Americans filing unemployment claims last week.

It’s still unclear on what terms the banks will lend money to businesses and who will be eligible to borrow from the facility.

Fed officials have declined to offer information on the exact timing of the program, but Brusuelas guessed the Fed would start channeling funds into the banking system in around two weeks from this Friday, based on his communications with officials from the U.S. central bank.

Even though precise details still remain unavailable to the public, comments by Atlanta Fed President Raphael Bostic suggest the Fed’s facility is likely to follow the format shown in the chart below. 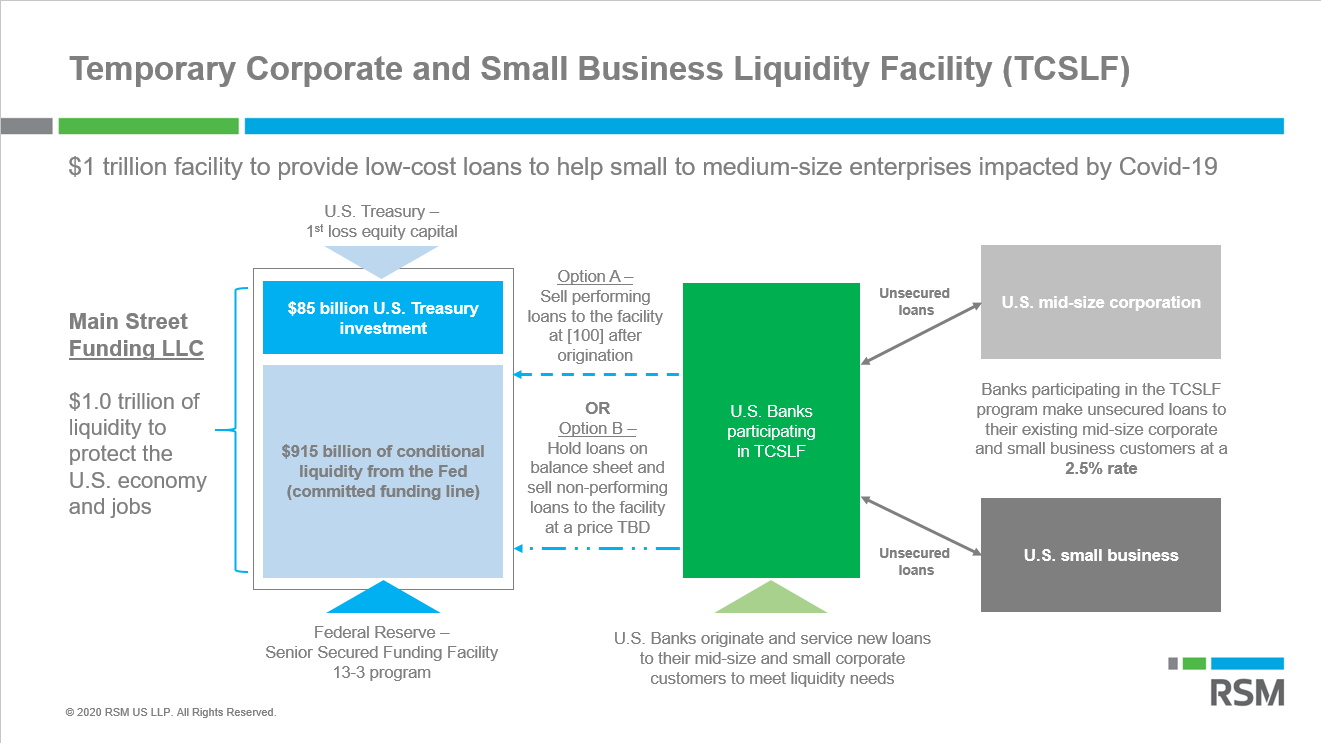 Approved by Congress, the U.S.Treasury Department will first provide funds to the Federal Reserve as seed capital for the program. This well of funds will serve as a cushion against any losses in the event that businesses fail to pay back the funds to banks.

The Fed will then lend against the Treasury’s capital, multiplying the amount of credit it extends to banks, which will, in turn, pass low-interest loans to businesses.

The Fed’s liquidity facility will act as a complement to the another program run by the Small Business Administration lending $350 billion to companies with 500 or fewer employees that can be partially forgiven if they meet certain requirements.

It’s unclear, however, if smaller businesses will want to tap the Fed’s lending program and whether more indebted firms have the capacity and desire to add to their borrowings, said analysts.

Stocks were lower on Friday on worries over rising tally of coronavirus cases in the U.S, but on pace to book sharp weekly gains. The S&P 500 SPX, -1.65%   and the Dow Jones Industrial Average DJIA, -2.19%   were down more than 2% on Friday.