Thursday’s selloff started accelerating around midmorning, after Culp began speaking as part of the Bernstein Strategic Decisions Conference. He provided second-quarter guidance on free cash flow for the first time, suggesting that cash burn could be double what it was in the first quarter.

Culp said that the $2 billion in cost cutting, and $3 billion in cash conservations actions, the company has taken amid disruptions caused by the COVID-19 pandemic “won’t nearly be enough,” given the “multiyear challenge” that the aviation industry is likely to face. 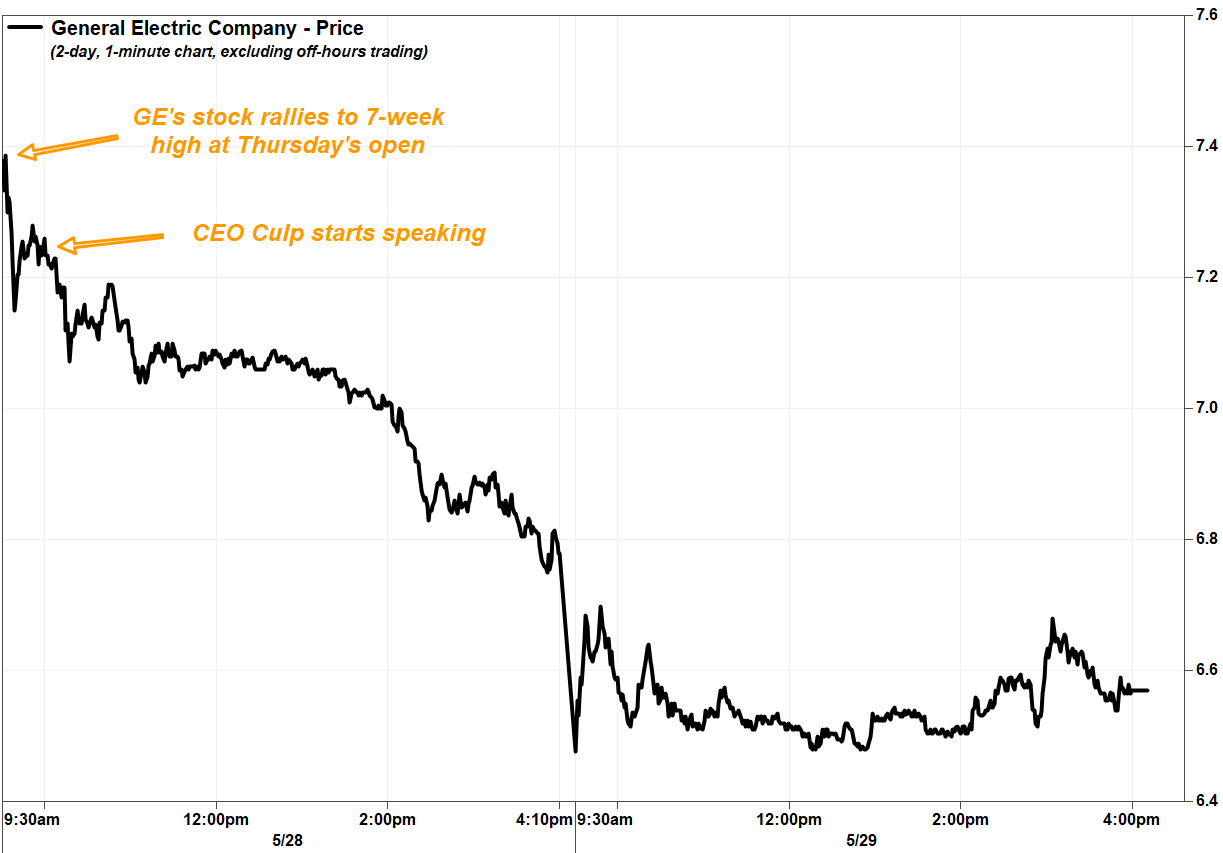 “We, at this point, think in the second quarter, we’re going to see our free cash flow number come in at a negative level, probably in the $3.5-to-$4.5 billion band, as best we can tell today,” Culp said. “We think that gets better in the second half of the year, but I think 2020 is likely to be a negative free cash flow year for GE, as we take those cost and cash actions, and prepare for a recovery given what we see today, for 2021 to be positive.”

In the first quarter, the company’s cash burn came to $2.2 billion.

The FactSet consensus for free cash flow is now negative $5.11 billion, compared with a negative $4.02 billion consensus about a week ago.

Culp said on the conference call with analysts on April 29 following the release of first-quarter results, according to a FactSet transcript, that the second quarter would be “more challenging” because of COVID-19, but “didn’t want to take an attempt at framing formal guidance” given the fluid nature of the pandemic’s impact.

Culp also said in his presentation Thursday that “a third to half” of the cost and cash actions that have been taken would be permanent, based on current expectations of a slow recovery in the aviation industry, and that he will push for more of the actions to be permanent.

GE has been trending lower for years, as the company struggled to clean up the financial mess left by its GE Capital business, and deal with the troubles in its GE Power business. After Culp took over in October 2018, the stock rallied in 2019, as it appeared he put the company on a recovery path, as GE sold off assets to pay down debt and narrow its focus.

Then GE Aviation, currently its biggest business segment based on revenue, got hit with a double dose of a prolonged grounding of Boeing Co.’s BA, -2.65% 737 MAX planes, for which GE makes the engines, and the COVID-19 pandemic. On May 15, about two weeks after GE reported first-quarter results, the stock fell to its lowest close since December 1991.