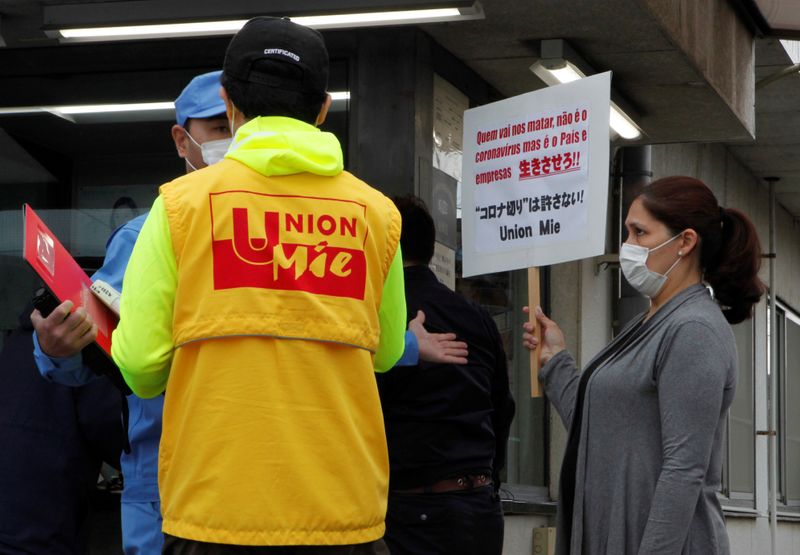 TSU, Japan (Reuters) – Eight years after arriving from Brazil, Rennan Yamashita sat in a government office in central Japan, filling out forms for unemployment insurance after losing his job for the ninth or 10th time – he has lost count.

Some weeks earlier, he was laid off from his job at a car parts factory. He only held that job for four months.

The coronavirus pandemic has hit Japan’s economy hard and many factories, including those of carmakers, are scaling back production.

Foreign workers are particularly vulnerable, with a weaker support network and language barriers that prevent them from seeking government help.

Union groups, labour lawyers and nonprofit organisations say foreign workers such as Yamashita are the first to lose jobs in “corona cuts”, which they fear may expand to the kind of mass layoffs seen in the 2008 financial crisis.

Last month, the Japan Center for Economic Research estimated that if Japan’s GDP contracted by 25 percent this year, the unemployment rate would reach 5% and about 2 million people could lose their jobs.

In March and April, a labour organisation based in Mie, a manufacturing centre about 300km west of Tokyo, received 400 consultations from labourers who were affected by the coronavirus. About 330 were foreign workers.

Last year, 34.5 percent of foreign employees in Mie were temporary workers, compared with the national average of 2.5 percent. “It’s almost like they’re hired so that they can be fired when the going gets tough,” Jimbu said. “They’re just a spare bolt in the eyes of the employer.”

Japan has become increasingly reliant on foreign labour. With a third of its population over 65 and a smaller working population, the government has eased some immigration restrictions.

More than 1.6 million foreign workers supported the Japanese economy as of October 2019 – a four-fold increase from 2008.

A labour ministry official told Reuters the ministry does not officially track the number of foreign workers laid off because it provides “support to all workers” regardless of their nationality.

But most foreign workers don’t turn to the government for help. While Union Mie handled hundreds of consultations this year through mid-April, the local labour ministry office saw only seven.

Kaori Nakao, a Japanese-Brazilian woman, sought help from the union when her employer laid her off from a car component factory at the end of March.

The company told her she was being fired because of coronavirus-related production cuts. Nakao, 38, was also ordered to leave her company apartment.

Pregnant with her fourth child and with no savings, she asked Union Mie for help.

Last month, union members and Nakao protested outside her employer’s office and the Mitsubishi Heavy Industries Thermal Systems factory where she worked.

Mitsubishi Heavy Industries Thermal Systems declined to comment because it did not employ Nakao.

“I just want to work,” Nakao said. “I have zero money and I can’t even buy food for my children.”

Yamashita, who is still looking for jobs, said he had found an open position at another car parts factory a few weeks ago.

The contract was only for three months – maybe even less. Still, Yamashita said, it was something. He interviewed for the job, and was looking forward to a respite from searching.

But then he got a call. The position wasn’t available anymore.

“We are the first to go,” he says of foreigners working in Japan. “I already know about that.”