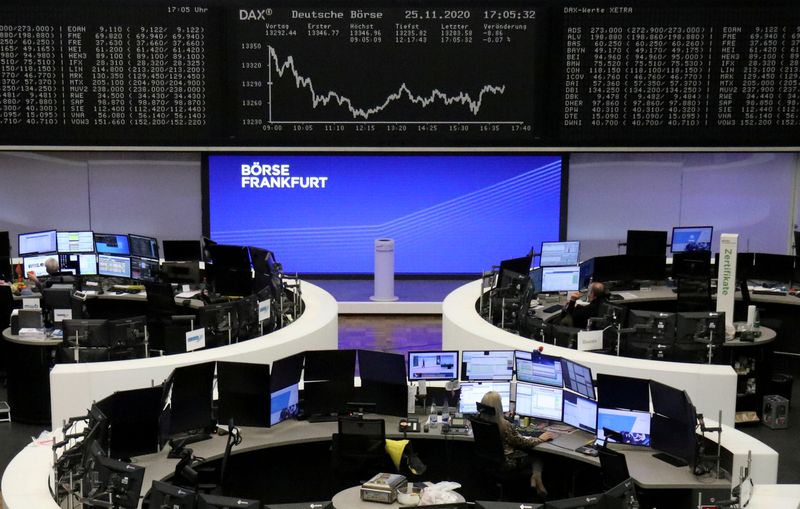 Data showed German exports rose less than expected in October, but foreign trade still gave Europe’s largest economy a boost at the start of the fourth quarter as it struggles to avoid slipping into a double-dip contraction.

Johnson is to meet European Commission chief Ursula von der Leyen at Brussels for dinner on Wednesday in a last ditch attempt to seal a deal.

“It will be a coin toss, there is a lot of symbolism,” said Teeuwe Mevissen, senior market economist at Rabobank in Amsterdam.

“But our base-case scenario is still that we will see a very skinny deal before the end of this year,” he said, adding that Wednesday’s optimism was more from progress on a U.S. stimulus package after the Trump’s administration proposed a $916 billion coronavirus relief package.

Gain in Europe were led by value stocks with autos, banks and oil stocks rising more than 1%.

The tech sector was in the red, dragged down by a 11.7% slide in chipmaker STMicroelectronics after it postponed its $12 billion annual sales target by a year to 2023.

Among individual stocks, Signify NV, slid 6% after the world’s largest lighting company said it expects revenue to drop 13-13.5% this year due to the COVID-19 pandemic.

Shares of planemaker Airbus rose 1.2%. Britain said it would suspend retaliatory tariffs from Jan. 1 imposed on U.S. goods as part of a dispute over aircraft subsidies.

The multi-billion dollar tariff battle relates to a row over state subsidies for aircraft manufacturers Airbus and Boeing (NYSE:BA).

Greek stocks rose 1.5% and were on course for their 14th straight day of gains, their longest winning streak ever.