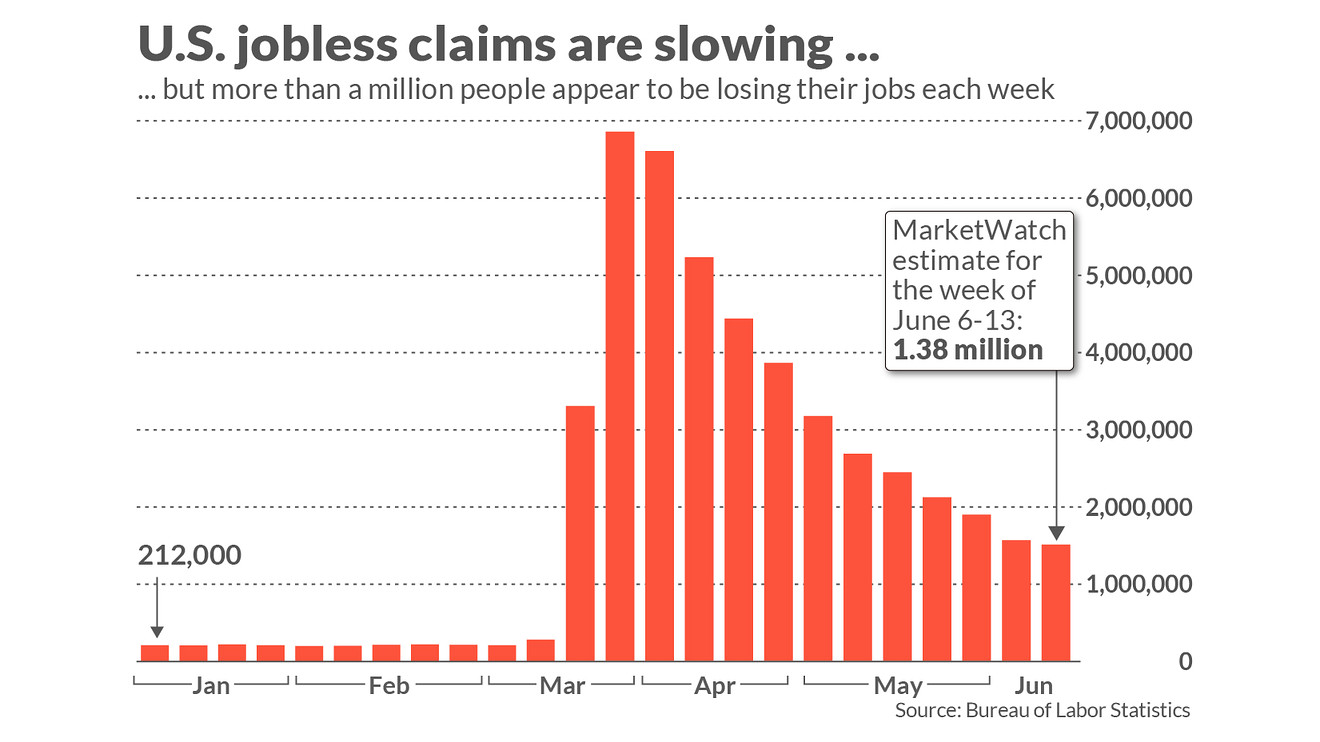 The number of Americans applying for unemployment benefits each week is still shockingly high if the government’s math adds up, but some economists are starting to wonder.

After a rapid decline in late April and May, the historically high level of initial jobless claims only fell 4% to 1.51 million in the seven days ended June 13. It was the smallest percentage drop in new claims filed traditionally through state unemployment offices since the early stages of the coronavirus pandemic.

By all rights, weekly claims should have fallen even faster and dropped below the 1 million mark by now, economists say. There was a record loss of jobs in March and April, and a rebound in employment in May as the economy began to reopen.

Why haven’t they ? Two explanations prevail.

The most widely held view is that a second wave of layoffs has probably taken place as companies struggle to cope with a loss of customers, sales and profits. Many businesses aren’t operating close to full capacity and simply don’t need as many workers.

Read:U.S. could hit Japan-like levels of government debt by 2050

The Wall Street investment bank Jefferies LLC has been tracking the level of web traffic at state unemployment offices. Economists at the firm found that traffic appeared to flat-line in mid-June and end a streak of sharp declines.

The implication: Fresh layoffs are pushing more people to apply for benefits.

The other possibility? States are reporting multiple claims for the same people, reflecting the chaos that ensued after unemployment offices were swamped with a record number of applications for unemployment benefits. More than 50 million applications have been filed in just three months, compared to a measly 200,000 or so a week before the crisis.

Severely overburdened state agencies have been unable to sort through their records to identify repeat or duplicate claims, never mind check for fraud, the thinking goes.

“Even if there was no rehiring going on, the wave of layoffs that followed the government-mandated lockdowns should have resulted in a spike in initial claims that ended once the flood of filings had been processed,” wrote Stephen Stanley, chief economist at Amherst Pierpont Securities, in a note to clients.

While new layoffs have likely taken place, Stanley added, “the pace of initial claims in recent weeks is simply not credible.”

The number of people still collecting unemployment benefits, meanwhile, also remains stubbornly high. These so-called continuing claims filed through the states, which are reported with a one-week lag, have barely changed in the past month.

An actual, or unadjusted 18.7 million people were getting benefits as of the first week of June. If more Americans are returning to their jobs, continuing claims should decline more rapidly.

And as bad as those numbers are, they are even worse if jobless claims filed through an temporary federal-relief program are included. An unadjusted 29.2 million people were reportedly receiving benefits as of May 30, the most recent data available.

In the latest data, due for publication Thursday, for the week ended June 20, economists polled by MarketWatch predict new claims will fall slightly to 1.38 million.