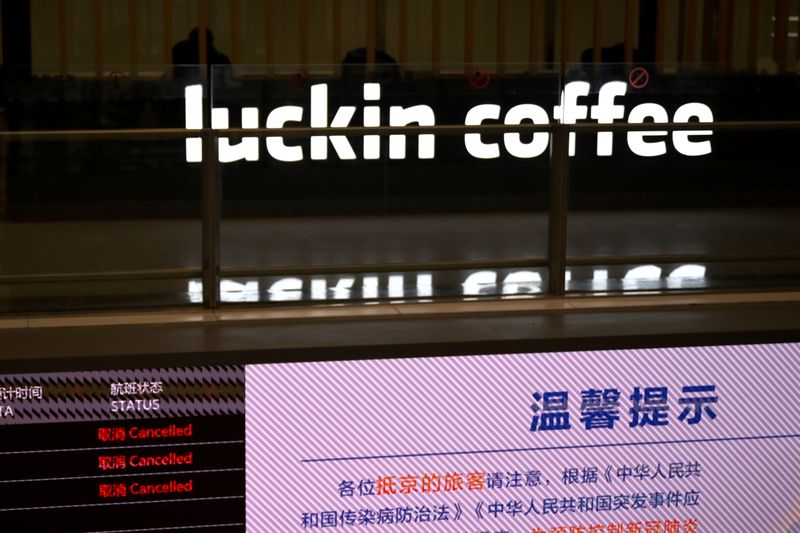 BEIJING / HONG KONG (Reuters) – Luckin Coffee’s app has rocketed to become the second most popular in China as consumers rushed to claim a free drink that it has long offered for downloading, worried the chain might collapse after it said much of its sales last year were fabricated.

“I heard that if you download the app, you will get free coffee,” said Beijing-based Gan Lin, 35, who downloaded the app on Friday.

“I’m not that into coffee but it would be a pity to lose the chance for a free drink. After all, you don’t know how much longer Luckin can hold on.”

The coffee chain’s app usually ranks between the 70th and 100th most popular free app downloads for users of Apple (NASDAQ:AAPL)’s iOS operating system in China, according to app performance tracker App Annie. Apple’s App Store is one of the biggest in China.

Luckin’s shock announcement last Thursday that its chief operating officer and other employees had fabricated sales sent its shares plunging more than 80% and wiped more than $5 billion off the company’s market capitalisation.

The Starbucks Corp (NASDAQ:SBUX) rival only went public last year, positioning itself as a tech version of a retail business, where users ordered coffee via its app for delivery to their offices and homes.

It has relied heavily on discounted sales to drive its fast growth and capture market share. The loss-making company began operations in January 2018 and by December 2019, had over 4,500 stores – overtaking Starbucks, with 4,100, in the process.

Luckin on Sunday said its business would continue to operate as normal and apologised to its customers.

The company did not respond on Tuesday to a request for comment on the surge in demand for its app.

The newfound Luckin coffee frenzy has been strong enough to freeze the app in many Chinese cities, leaving customers unable to place orders for several hours.

On Luckin’s Weibo social media account, thousands of users have expressed hope the coffee chain will continue to operate because they haven’t used up their vouchers.

Some were more genuine fans. One said on Weibo that if Luckin survived the scandal, he would drink Luckin “even if there is no discount”. His comment gained 66,000 likes on Weibo.