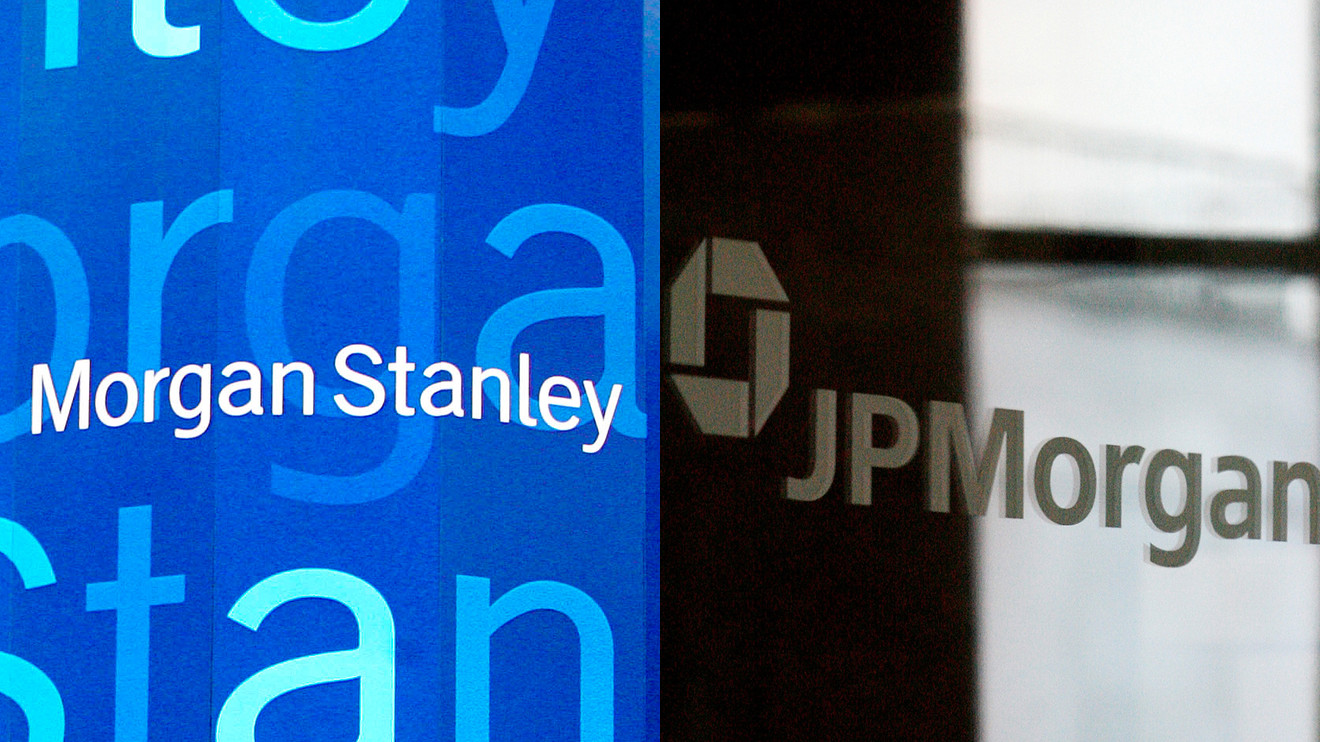 Bank stocks typically drop during recessions. This time around, with the big players well-capitalized, largely free from the worst of loan loss set-asides and benefitting from a rebounding economy, investors may be looking at an opportunity staring them in the face.

And the biggest banks have clear advantages: fees from investment banking and asset management. (Below are tables showing expected and historical provisions for loan losses, non-interest income, earnings per share and analysts’ ratings for the largest dozen U.S. banks.)

Just on Oct. 2, Morgan Stanley completed its acquisition of discount broker E-Trade Financial. At that time, the bank said the firm’s total assets under management (AUM) had risen to $3.3 trillion. That makes for a pro forma total of $3.8 trillion in AUM, assuming the Eaton Vance acquisition is completed following regulatory approval.

A Twitter posting from Stephanie Link of HighTower Advisors underlined how hot the asset management business is:

Maybe this shouldn’t be a surprise, considering the asset bubble fueled by the Federal Reserve’s nearly $3 trillion increase in the money supply (M2) this year.

David Konrad, a managing director and senior research analyst at D.A. Davidson, sees Morgan Stanley’s moves as “lowering the risk of the franchise” and improving its return on equity.

“It allows them to better leverage capital” that would otherwise be locked up by regulators’ temporary restrictions against dividend increases and share buybacks, Konrad said in an interview Thursday.

He said the Eaton Vance portion of Morgan Stanley’s combined asset-management business will be relatively safe from pressure on fees than competing firms because Eaton Vance “has a lot of customized individual retail accounts.”

‘We recommend buying the Morgans’

Even before Morgan Stanley’s latest asset-management splash, Konrad wrote in a report on Oct. 6: “We recommend buying the Morgans.”

His “top idea” is Morgan Stanley because of its mix of businesses, strong level of capital and the addition of E-Trade. He wrote that J.P. Morgan Chase & Co. JPM, -0.57%  “should regain its multiple” because of increasing revenue, lower credit costs after a brutal first and second quarters, and “increased visibility on its dividend.”

Konrad prefers JPM to Bank of America Corp. BAC, +0.47% as a long-term investment because it “offers better fee-income growth through market-share gains in capital markets,” and because of higher returns on capital and a more attractive valuation to the shares when considering its greater returns.

Konrad has neutral ratings on BAC and Goldman Sachs Group Inc. GS, -0.21%, while rating Citigroup Inc. C, +0.47%  a “buy,” despite investors’ frustrations with the stock, in part because “both Citi and JPM have meaningfully higher reserve to loan ratios than BAC.”

You can see in the last table below that sell-side analysts as a group have the highest percentage of “buy” ratings for Citigroup and expect its stock to increase the most over the next year among the 12 listed here.

A bank’s quarterly provision for loan-loss reserves is the amount it adds to loss reserves to cover expected losses on loans and leases. Yes, it is moving money from one bucket to another, but it directly lowers earnings.

Here’s a summary of consensus estimates for third-quarter provisions among analysts polled by FactSet, compared with actual provisions over the past four quarters, for the largest 12 U.S. banks. The figures are in billions, and you will need to scroll the tables in this article to see all the data:

During a year of economic turmoil, quarter-to-quarter comparisons can be more important than year-over-year comparisons. So the table includes both, and you can see analysts expect the third-quarter reserve set-asides to be much less painful than they were during the first half of 2020.

In his own bank earnings preview report for clients, Odeon Capital Group analyst Richard Bove called third-quarter provisions “the most critical of any number produced in the quarter.” He expects “a relatively good set of numbers,” but warned that negative surprises would cause meaningful declines for the stocks, even from their current discounted valuations.

Bove cited a decline in commercial and industrial loans and “moderate growth elsewhere” as among the reasons provisions would decline, but also wrote that “it is beginning to appear that the banks may have over-reserved in the first half.”

Banks look ahead when setting aside reserves. It takes time for a loan to go through past-due cycles and be written-off. This means that third-quarter charge-offs will rise from the second quarter. But again, looking ahead, investors’ reaction to this bit of bad news may be mitigated by the lower reserve builds.

Konrad said on Thursday that he expected the largest banks’ provisions for loan losses to be “down materially,” with loan charge-off activity “pretty steady,” on the consumer side, although commercial charge-offs could be “lumpy.”

Interest income is pressured this year because of the Federal Reserve’s bond-buying, which has pushed down long-term interest rates. Ten-year U.S. Treasury notes TMUBMUSD10Y, 0.777%  yield a paltry 0.77%, down from an already low 1.92% at the end of 2019.

For Goldman Sachs, Morgan Stanley and J.P. Morgan Chase, a spike of bond issuance during the first quarter caused an increase in investment-banking income. For the three banks, third-quarter non-interest income is expected to decline sequentially but still be elevated from a year earlier. The figures are in billions:

Here are consensus estimates for third-quarter earnings per share, with comparisons of EPS for the previous four quarters for the group:

So the 12 largest U.S. banks are expected to post profits for the third quarter, after provisions for loan-loss reserves led to losses during the previous two quarters for several of them. Those quarterly comparisons will be much more important than blind comparisons with the year-earlier figures.

Brian Kleinhanzl, managing director for large-cap banks at KBW, expects third-quarter earnings per share for the nine largest U.S. banks to be down 16% from a year earlier, but wrote that year-over-year declines have “slowed form the prior quarter.” He expressed caution, rating the group “equal weight,” as “near-term risks outweigh the long-term benefits that should emerge when the global economy recovers more meaningfully,” he wrote in a report Oct. 1.

Here are ratings summaries and consensus price targets among analysts polled by FactSet for the 12 largest U.S. banks. Again, scroll the table at the bottom to see all the data:

Don’t miss:16 stocks — from Adobe to Home Depot to Zillow — to help you tap into the housing boom