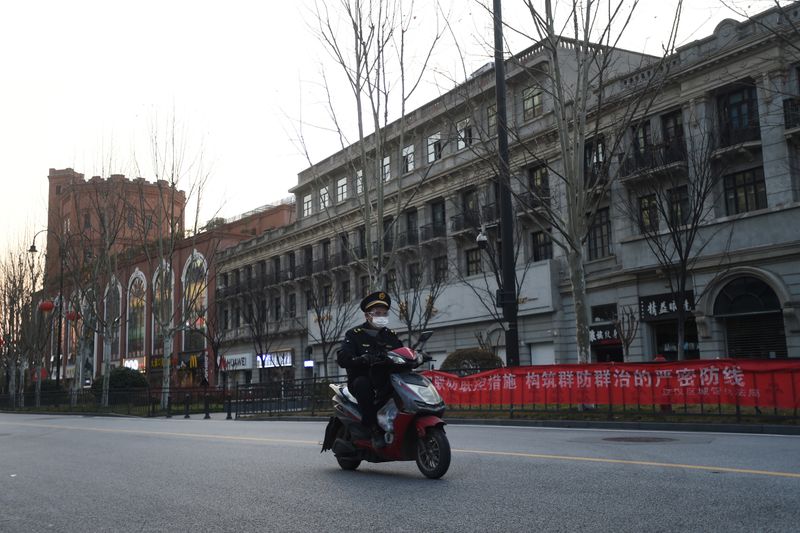 NEW YORK (Reuters) – U.S. investors’ persistent optimism that the coronavirus will be short-lived is being challenged by increasing evidence that the virus has spread beyond China’s borders.

While the World Health Organization (WHO) said a continued decline in the number of new cases of coronavirus infections in China was encouraging, it said that infections outside the country could still spread.

There has been a spike in new cases of coronavirus in South Korea, and international authorities are trying stop the coronavirus from becoming a global pandemic.

“What is becoming clear is that the consensus that is being priced into risk assets is on much thinner ice,” said Ed Al-Hussainy, senior interest rate and currency analyst at Columbia Threadneedle Investments.

“The consensus (forecast) has a very solid recovery in earnings this year. That is coming under pressure from loss of demand in Asia and also the stronger dollar.”

Risk averse investors piled into the U.S. dollar on Thursday, pushing the greenback to its highest level in nearly three years against a basket of currencies. Gold, another popular haven asset, climbed to a seven-year high.

U.S. equity markets – which had been posting new highs – sank 1% on Thursday on worries about the virus, as news reports of infection levels at a Beijing hospital hit during trading.

While the firm’s base case prediction is that the virus will be largely controlled by the end of March, she said that could be upended “if we see the virus spreading independently in Europe or the U.S. at an accelerated pace,” which could lead to greater global economic disruption.

Others are watching closely for signs of containment. Indeed, experts have said that trying to predict a peak is destined to fail.

“It’s less about calling a peak, and more about when we can say COVID is effectively contained,” said Grant Wilson, head of Asia Pacific at Exante Data, which provides institutional investors with advisory services and data analysis.

“We aren’t even close to that yet,” said Wilson, who is based in Sydney.

One epidemiologist says it could get a lot worse.

Marc Lipsitch, professor of epidemiology at Harvard University’s T.H. Chan School of Public Health, said by email – repeating comments published on the Harvard Gazette’s website – that there is likely to be a period of widespread transmission in the United States.

Lipsitch said there was some evidence that coronaviruses transmit less efficiently in warmer weather. “So it’s possible that we will get some help from that, but I don’t think that will solve the problem,” he wrote.

Gaurav Saroliya, director of global macro strategy at Oxford Economics, said global risk assets were at risk of correction if there is worsening news about the virus.

“There has been a trickle of headlines documenting the global spread,” said Saroliya. “What we haven’t seen quite yet is meaningful spread to Europe or the U.S. Until that happens or you begin to actually see the effects of the virus in macro data in China and beyond China, the markets in the West, particularly the equity and credit markets, are likely to stay in a bit of denial.”